Hannah, who plays reccurring character Kandice Taylor in the BBC soap, posted a picture of her giving her daughter a kiss to her Instagram page.

The former S Club 7 and her partner Adam Thomas welcomed Téa on December 20th 2018 after announcing her pregnancy in September 2018.

She told OK! Magazine it felt "special" to be expecting a baby with boyfriend Adam Thomas after experiencing such heartbreak.

Reflecting on her previous two miscarriages, Hannah said: "They both happened early on in the pregnancies, around the five-week mark. It's such an upsetting thing so it's made it hard to relax this time, especially during the first few months.

"Going through all that makes this pregnancy even more special, though. I feel very lucky that everything has been okay this time."

Although Hannah's EastEnders character Kandice has been off-screen recently, her character was also confirmed to of welcomed a new baby when the Taylor family attended the baby's christening.

I feel very lucky that everything has been okay this time.

Viewers first saw Kandice in EastEnders back at Christmas 2017 when Karen and Bernie were forced to visit her house and beg for some much-needed cash. 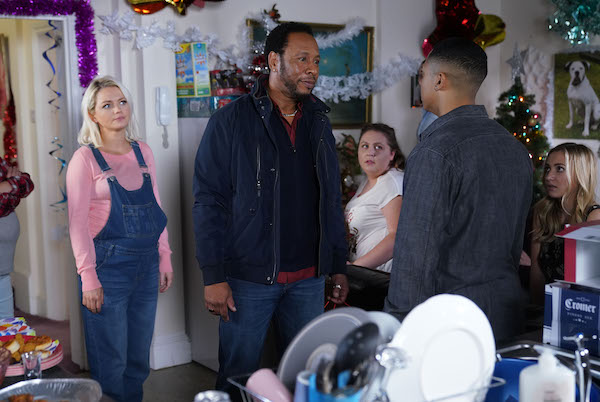 Hannah has made a few appearances in the BBC soap (Credit: BBC)

She also appeared in July 2018 after she told her partner Malcolm's golf club that she would take part in a sponsored climb of Mont Blanc, however she didn't want to do it and turned to sister Karen for help.

She returned once again December 2018 for a Christmas party, which ended badly when Karen caught pregnant Kandice in the bathroom with her ex Mitch.

Thinking they were seeing each other, she tipped a trifle over Kandice's head. But it turned out Mitch and Kandice were planning on putting in a new bathroom for Karen.