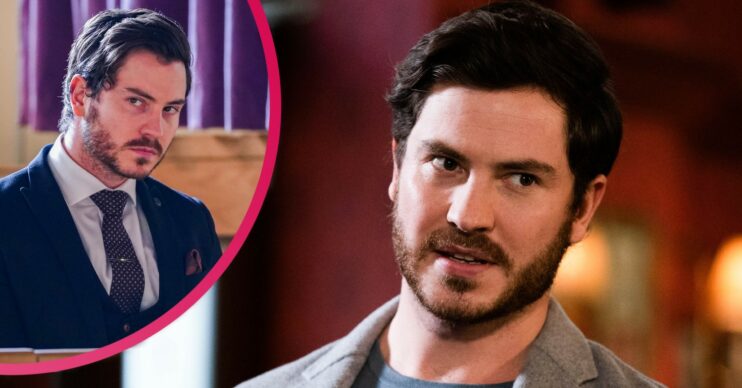 EastEnders fans are convinced that Gray is going to kill his boss, Laura after last week.

In last week’s scenes, Gray and his new girlfriend, Chelsea Fox, went to one of Gray’s work functions.

At the event, the new couple made the most of the free bar. However at the event it became clear Laura is not keen on Gray.

Later in the evening he ended up embarrassing himself by falling off a table drunk.

After Chelsea took Gray home, Laura stopped by the house. While Gray slept, she warned Chelsea to run from Gray while she can.

The next day, Gray woke up hungover and late for a work meeting.

Meanwhile Chelsea confided in Kim about what Laura had said.

Later Gray had a phone call with Laura and she wasn’t happy with his work performance.

Responding to one of her tweets about her missing her train, he responded saying: “People like you always get what’s coming” from a fake account called Jasper.

Fans believe she will be Gray’s fourth victim.

Oh my days 😱😱 Gray has got a secret Facebook pretending to be Jasper!! Who do you think he’s gonna kill next cus we know he’s a serial killer 🔪 Chelsea or Laura????? 🧐 #EastEnders

Oh no Gray is going to kill Laura #EastEnders

EastEnders: Who has Gray killed?

Last year, Gray killed his wife Chantelle. Gray had been abusing Chantelle and she tried to leave him and take the kids.

However he ended up pushing her over and onto their dishwasher, which had a knife pointing upwards.

Instead of calling for help, Gray let Chantelle die and made it look like she tripped and fell.

He then went on to kill his lodger Tina Carter, who figured out Gray killed Chantelle.

Gray later could be seen disposing of Tina’s body and told her family she fled Walford to get away from the law, as it was believed she attacked Ian Beale.

This year, Gray killed Kush Kazemi. Kush was engaged to Gray’s friend and babysitter Whitney Dean, who Gray had grown attached to.

To stop them from moving to Dubai, he went to the tube station. As Whiney took Kush’s son Arthur to the toilet, Gray stepped out of the shadows and ended up pushing Kush in front of an oncoming train.