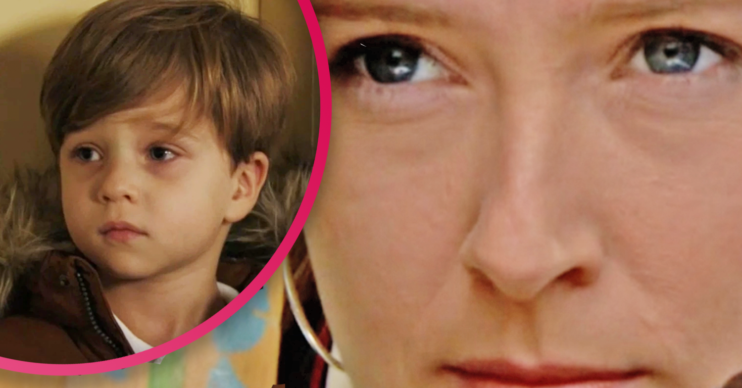 EastEnders: Frankie Lewis to kidnap Ollie Carter as she grows close to family?

The barmaid was caught secretly photographing the youngster

EastEnders viewers are convinced Frankie Lewis will kidnap Ollie Carter after stalking the youngster and his family.

The photographer – played by Rose Ayling-Ellis in the BBC One soap – has left fans fearing for Ollie’s safety after she was spotted secretly taking pictures of the little boy.

She also told Ollie he reminded her of her dead brother Harry.

During last night’s episode, Tina asked Frankie to join her in the Queen Vic.

On the date, Frankie spotted Ollie sitting by himself and immediately approached the youngster.

She said: “You remind me of someone – someone very special.

“You and my little brother are almost the same age.

Later on, Frankie was seen secretly photographing Ollie and his family near the market stalls.

What did EastEnders viewers say?

Taking to Twitter, one wrote: “Frankie is gonna kidnap him ain’t she? #EastEnders.”

A second speculated: “Why do I get the feeling Frankie is going to try and get close to the Carters to get close to Ollie and she is going to end up believing he is her brother and try and kidnap him or something.”

Another commented: “I feel a stalker & kidnap situation with Frankie #EastEnders.”

A fourth added: “I definitely feel like Frankie is going to kidnap this child.”

A fan stated: “Pls don’t tell me Frankie’s gonna pull a mad may and try to kidnap a child.”

Looks like Frankie's obsession with Ollie is reaching fever pitch. What is her game could it be a kidnapping on the cards #Eastenders

Frankie is gonna kidnap him ain’t she? #EastEnders

Speaking to Metro.co.uk, he said: “It is Christmas, you know what Christmas is about on the [expletive] Square!

“I’ll let you use your imagination on that one. We’re due another dark Christmas, aren’t we?

“That’s how we roll. We’ve really took it up a level.”

He continued: “There’s creatives coming back to work and we’re all chomping at the bit so we’re all bringing out A game to the table.

“I don’t know how long that’ll last but at the moment, we’re so excited to be doing something in part of a show we love.

“Everyone is delivering beautiful and powerful performances.”