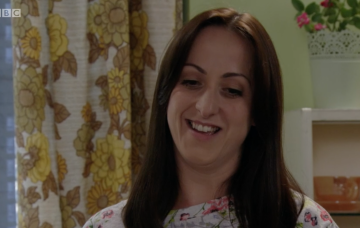 Fans of EastEnders were wowed by Natalie Cassidy’s new look as she attended the National Television Awards with the rest of her co-stars.

The actress posted pictures of herself glammed up for the event on her Instagram.

Thank you for making me NTA ready. Love you. ♥️ @bbceastenders let’s do this!

She captioned the post: “Thank you for making me NTA ready. Love you. @bbceastenders let’s do this.”

Another added: “You look so amazing!”

Someone else said they “didn’t even recognise” her at first!

EastEnders lost out on the Best Serial Drama NTA to Emmerdale, however it appears the cast all still had a good time.

Me and my pals ❤️

Fans loved the snap, which Natalie captioned: “My favourite. The end.”

My favourite. The end.

Natalie has been a part of EastEnders since 1993 playing Sonia Fowler.

Over the last few weeks, Sonia has gotten herself into some trouble.

After discovering her ex-husband Martin was involved in a hit and run, she discovered who the patient was and made an attempt to get close to him.

However the victim, called George, discovered Sonia had a connection to the man who ran him over and began blackmailing her.

He demanded £10,000 or he would go to the police and reveal Martin was the one who ran him over.

Wanting to protect Martin, who she had recently got back together with, Sonia decided to steal £8000 of Dot’s money to pay George off.

Afterwards, Martin ended things with Sonia and she was forced to confess what she did to him.

Knowing Sonia was trying to protect him, he told Dot that he was the one who took her money.

However that wasn’t the first time Sonia attempted to steal Dot’s money.

Just weeks before, she tried to take £5000 from Dot’s bank account but blamed it on hackers.

Will Dot ever learn the truth?

Did you watch the NTAs last night? Leave us a comment on our Facebook page @EntertainmentDailyFix and let us know what you think!