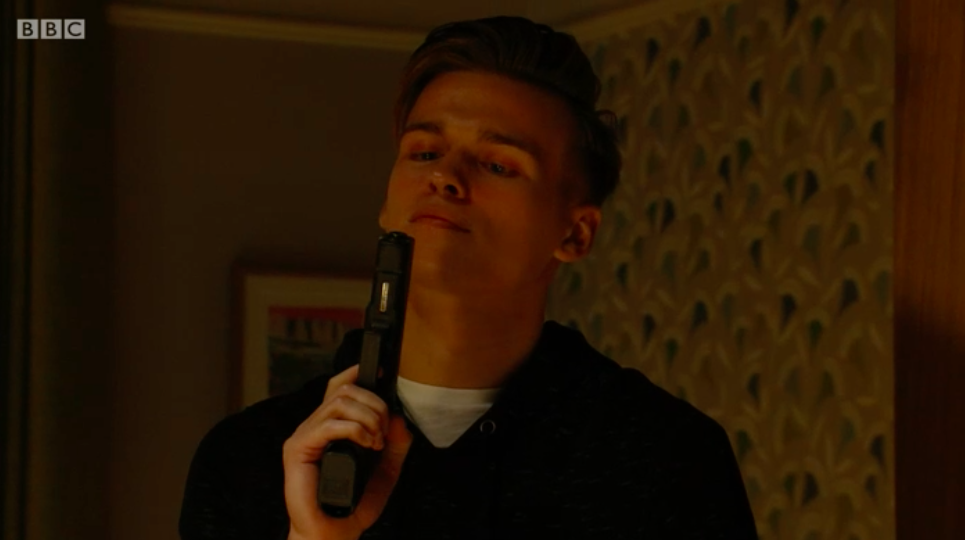 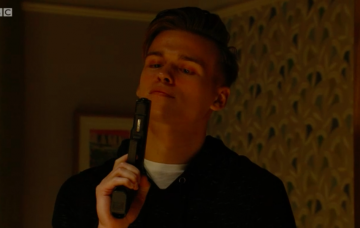 He's developing a taste for killing

EastEnders fans are concerned there is a new serial killer on the Square.

Last night they watched in horror as Hunter Owen seemed to relish having murdered Ray Kelly and kept the gun he did him in with.

Mel convinced Hunter she would protect him after he killed Ray to save her life, but fans fear she has created a monster.

Fans remember shortly after Hunter arrived he took a psychopath test and scored a very high score, and now it seems it was accurate.

At the end of the episode Hunter caressed the gun and began to pretend shooting it, signalling he hasn’t finished his killing career.

Read more: EastEnders: Did Hunter turn the gun on himself after killing Ray?

One fan wrote on Digital Spy forums: “I have a feeling that EE want to make Hunter into the next thug or serial killer seen as it looks like he enjoyed shooting ray as he kept the gun and was checking it out, maybe that could be in store for 2019?”

Another fan commented: “He was quite sinister at the end and was remarkably calm and manipulative after shooting Ray whilst Mel was in a panic as a normal person would be, so I think he’s going to turn killer.”

A third asked: “I wonder who he will kill next…”

Another added: “Hunter has a gun and seemingly has a taste for using it.”

Worse yet, fans suspect Hunter planned the murder all along and is now planning to frame his mother for it.

They watched as he convinced her to hand over her wedding dress so he could take it to a clothes bank, instead of burning it.

One fan wrote: “I think he meant to shoot Ray all along and with Mel there he could say he was protecting her.

“The fact he slammed the door on his ‘way to the Police Station’ instead of sneaking out, shows he knew she would follow him and ‘persuade’ him to return.

“I wouldn’t be surprised if he has it all planned to tell everyone it was Mel and she is lying about his involvement, to protect herself!”

Do you think Hunter is Walford’s new serial killer? Leave us a comment on our Facebook page @EntertainmentDailyFix and let us know what you think!