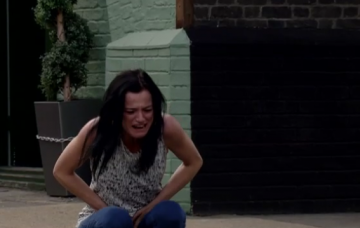 She started bleeding after an explosive showdown with her mum...

EastEnders fans were screaming at their TV’s last night as Hayley looked like she was experiencing a devastating miscarriage.

In disturbing scenes aired on Thursday (20 September), the pregnant Slater was seen clutching her belly in agony after realising she was bleeding.

The upsetting scare followed an explosive showdown with Hayley’s mum – and one fan even described newcomer Bev as “a bigger [bleep] than Stuart Highway”.

But her daughter’s suspicions were bang on – Bev just wanted to use her for a scam and was eyeing up her baby for financial uses, even calling the unborn baby girl a “cash machine”.

In fact, Bev cons married men into giving her money and even suggested she trick Hayley’s baby daddy, too!

During a furious row, Bev said some horribly cruel things to her daughter, telling her that her baby didn’t stand a chance.

“That’s a walking cash machine you stupid cow, why can’t you see that,” she seethed. “God help her. You should’ve got it sucked out when you had the chance like I should’ve.”

Heartless Bev even told her daughter that she “used to pray she’d be born dead”. How evil!

Viewers then saw callous Bev get into a waiting taxi, and ordering the driver to take her as far away from Hayley as possible.

Clearly in distress, Hayley was seen crying out in pain and begging her mum to help her – but her mum just sped away, despite evidence that Hayley was bleeding.

Is Hayley losing the baby?

Fans were devastated on her behalf, with many worried she was suffering a miscarriage.

Another cried: “Omg poor Hayley I hope she doesn’t lose the baby.”

I hope both Hayley and the baby are okay #EastEnders

Fans called her a “disgrace”, “malicious”. “disgusting” and “a piece of work”.

One blasted: “What kind of mother leaves a pregnant daughter who’s bleeding and could lose her baby alone?”

Another tweeted: “Hayley’s mum is brutal.”

God I hope Hayley's baby will be ok what a disgusting mum she has no wonder Hayley don't want her. #EastEnders

Hayley hasn’t had the easiest of pregnancies…

Not only does she face raising the baby alone, she is keeping the identity of the dad a secret from her family.

Hayley’s also been homeless and already had a scare after falling off a moped.

What did you think of Hayley’s mum Bev? Leave us a comment on our Facebook page @EntertainmentDailyFix and let us know what you think!