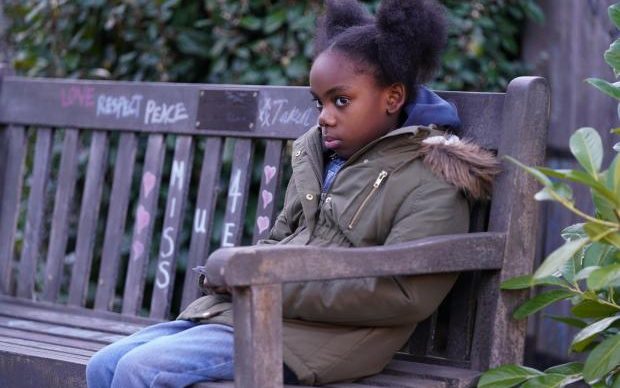 When Bailey Baker first arrived in Albert Square, fans heralded her as a “superstar” and claimed she was the “best thing to happen to the show”.

Just months later, some EastEnders viewers have now turned against the character – claiming she is “annoying” and a “spoiled brat”.

Viewers know that Bailey is Mitch’s child, and that her mum Dinah died in heartbreaking scenes earlier this year.

She took her own life during incredibly emotional scenes in May, after making the devastating decision that suicide was preferable to living with Multiple Sclerosis and mental illness.

Kara-Leah Fernandes’ performance as Bailey left many in tears following the upsetting storyline.

But sympathy has officially run out with some fans, who claim scriptwriters have turned her into a “40-year-old agony aunt”.

Writing on Digital Spy Forums, one disgruntled soap watcher wrote: “Anyone else find EastEnders’ Bailey annoying? She gets on my nerves and gets too much screen-time.”

Another agreed, replying: “It’s the writing for her that’s the issue. She’s 10, but talks like a 40-year-old agony aunt.

“Writing for kids is often a problem, they are either written too old or way too young with Amy being the perfect example for the latter. She still talks and behaves like she’s five.”

A third added: “Yes, don’t understand her popularity. She acts like a middle-aged woman. It’s annoying!”

“The fact is precocious smart-alecky kids are annoying, the ‘oh isn’t that cute’ soon wears thin and they become tedious,” said another.

One user blamed the soap, writing: “They’ve gone overboard in trying to cash in on her awards. She has become rude and self-entitled.

“Her whole family are spoiling her… They need to be pulling her up on her behaviour.”

Others chimed in, calling her a “cocky brat” and “boring”, while one fumed: “I used to like Bailey, but can’t stand her now.”

“She is an amazing actress but I agree the writing for her is so bad,” said one user.

She still has some fans, though, with one insisting she’s the best child actress on the show.

They stated: “She is the best young actor on the show. I don’t get the hate for her.”

“I don’t mind her,” typed another. “I liked it when she told off Phil Mitchell – more scenes like that! She honestly strikes me as one of the rarest people on the Square who could actually win a fight against Phil.”

“Please remember she is a child,” warned one more, while another said: “Wow I’m totally the opposite. I think she’s a terrific little actress.”

Do you love or loathe Bailey? Leave us a comment on our Facebook page @EntertainmentDailyFix and let us know what you think!