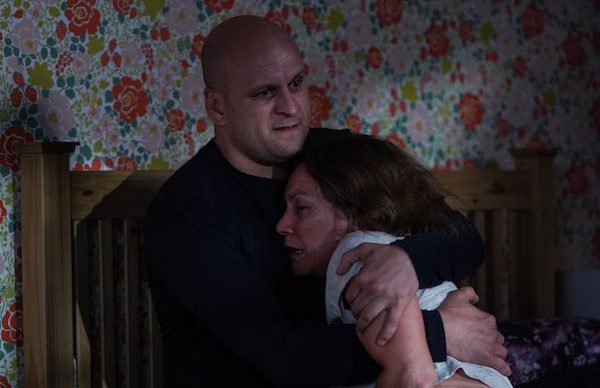 Forget Ballum, EastEnders viewers are crushing on a new Walford pairing – and have even declared them one of “the best soap couples of 2019”.

Although we’re not sure Rainie would appreciate the compliment right now, seeing as she’s locked in a room above an undertakers going cold turkey off her drug addiction…

Who said love was perfect?

After months of an unlikely love/hate rivalry, Rainie and Stuart’s relationship took a more intimate turn and the pair have just celebrated six weeks together.

Rainie’s not in the best place at the moment, given that she’s still suffering from withdrawal symptoms, but she was touched by the efforts Stuart had gone to in order to mark their anniversary.

Although, eating off a coffin isn’t everyone’s cup of tea!

And fans have warmed to the softer side to Stuart, who they wanted dead a year ago!

On Thursday night (September 26), as Rainie struggled with her withdrawal symptoms, Stuart held her in his arms and told Rainie he loved her.

He said: “I’m doing this for your own good, you know that, don’t you? You’re staying here until you’re better.”

As she continued to struggle, Stuart blurted out: “I love you.”

When Rainie cried: “You can’t love this.”

And fans were incredibly touched by the scenes.

Stuart and Rainie are one of the best couples in 2019, they both have a troubled past and both have gone through a lot in their lives, I want to see them happy 😔

ben and callum, tiff and keegan and jack and denise and rainie and stuart r the best couples on the square u cant change my mind we’ve hit goldmine with well matched couples lately

I love stuart and rainie as a couple!!!!!!! Stuart is brilliant!!!! #EastEnders

Catching up on @bbceastenders and Stuart telling Rainie he loves her is everything I need on a Friday morning. @RickyChamp1 and #TanyaFranks are a brilliant combo.

I love the love Stuart has for Rainie! My #Stainie are fabulous! #EastEnders pic.twitter.com/79ShFSv1nF

One wrote: “Stuart and Rainie are one of the best couples in 2019, they both have a troubled past and both have gone through a lot in their lives, I want to see them happy.”

Another said: “Ben and Callum, Tiff and Keegan, Jack and Denise and Rainie and Stuart are the best couples on the Square. You can’t change my mind, we’ve hit gold with well-matched couples lately.”

A third added: “Catching up on EastEnders and Stuart telling Rainie he loves her is everything I need on a Friday morning. Ricky Champ and Tanya Franks are a brilliant combo.”

“God, it’s unbelievable how much Rainie and Stuart have grown on me as a couple,” added one more.

Another said: “I love the love Stuart has for Rainie! My #Stainie are fabulous! #EastEnders.”

Do you see a bright future for Stuart and Rainie?