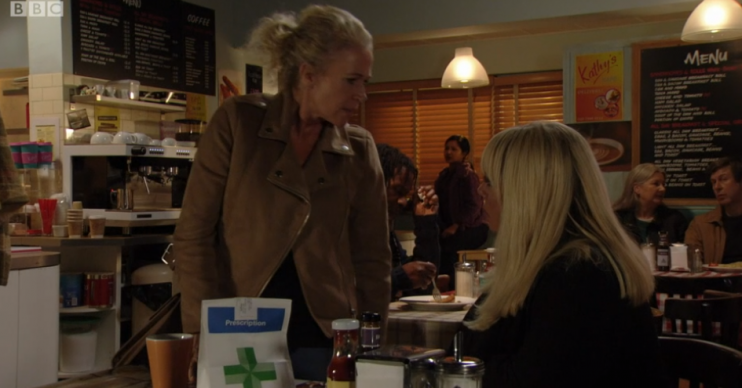 Whose side are you on?

The ferocious battle between Lisa Fowler and Sharon Mitchell took another nasty turn last night, and EastEnders fans stood divided about their loyalty.

Ever since Mel Owen died in horrifying circumstances, Lisa has put the blame firmly at Sharon’s door.

Hellbent on revenge, Lisa is determined to bring pregnant Sharon down and issued her with a warning during Tuesday’s episode (November 26).

Lisa is my queen. In your face, Sharon.

After her attempts to get Sharon arrested failed because video evidence proved Sharon had nothing to do with Mel’s death, a frustrated Lisa threatened Shazza.

She seethed: “You’re going to get what’s coming to you. The truth always comes out. And I won’t stop until it does.”

However, as Lisa becomes more intent on her mission to expose Sharon, those around her are becoming more convinced she’s not on her mental health medication.

Viewers know that Lisa has previously suffered from psychosis and was sectioned back in 2017 meaning she wasn’t able to attend Mel’s wedding to Ray Kelly.

Since then, she has been reliant on medication.

Those watching from home have been forced to take sides as the battle of the blondes continues to rage, with some calling Lisa a “hypocrite” for her vendetta on Sharon, while others think she’s a “queen”.

Writing on Twitter, one Lisa lover said: “Lisa is my queen. In your face, Sharon.”

Another said: “‘I can see right through you Sharon’. Love how Lisa has basically just been possessed by Mel #EastEnders.”

A third added: “Best scene of tonight. Christmas Day truth out soon. Loving Lisa, she’s not a looney, it’s not in her head at all.”

#EastEnders 👏👏best scene of tonight. Christmas Day truth out soon. Loveing #Lisa, she's not a looney it's not in her head at all. Lucy Benjamin ❤️💙 pic.twitter.com/KqaDlVJlQP

"I can see right through you Sharon"

Love how Lisa has basically just been possessed by Mel #eastenders 😂

Lisa is my queen. In your face, Sharon. #EastEnders

Watching Sharon be sweetness and light with Louise is actually sickening. Sharon’s playing this game to protect herself. She doesn’t care about Louise. #EastEnders

However, some viewers are Team Sharon all the way, with one saying: “Even though Sharon’s baby isn’t Phil’s and yes Mel was going to the airport to reveal the secret […] Mel’s accident was her own fault because she didn’t look both ways. So Lisa blaming Sharon doesn’t make sense #EastEnders.”

Another said: “Sharon is a queen. I love her too much, could never understand why people hate her #EastEnders.”

Why am i so in love with Sharon #eastenders

Oh Lisa shut up. Hypocrite who did the same thing but to a nice man like Mark, who wanted to mooch off Sharon’s money, obtained threatening to kill her child. Your either unwell or just evil. Sharon risked her life saving Mel despite it all. Revenge means more than your daughter

“Why am I so in love with Sharon? #EastEnders,” said one more.

“Oh Lisa shut up,” seethed one more Shazza fan. “Hypocrite who did the same thing, but to a nice man like Mark, who wanted to mooch off Sharon’s money, obtained threatening to kill her child. You’re either unwell or just evil. Sharon risked her life saving Mel despite it all. Revenge means more than your daughter.”

Many of those watching loved the tense scenes between the feisty ladies, with one saying they were “both iconic” and another writing: “Amazing scene between Lisa and Sharon!”

One more said the “Sharon/Louise/Lisa stuff was the only watchable part” of the episode.

Next week’s EastEnders sees Louise Mitchell go into labour but, as always in Albert Square, things don’t go quite as smoothly as the new mum might have hoped…

lisa and sharon both iconic😍👸🏼 #EastEnders

Lisa’s revelation that Sharon’s baby isn’t his has been playing on Phil’s mind, and no matter how adamant Sharon is that Lisa is lying, Phil is determined to work out the truth.

Are you Team Sharon or Team Lisa? Leave us a comment on our Facebook page @EntertainmentDailyFix and let us know what you think!