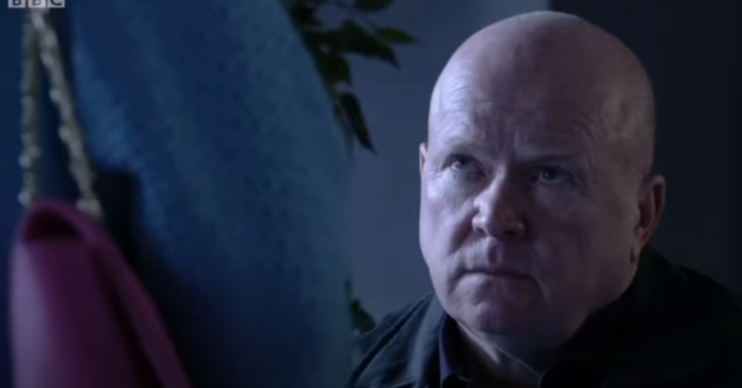 Last year a DNA test proved Phil is not the father

In 2018, Phil’s wife Sharon had an affair with Arches mechanic Keanu Taylor. But last year, Keanu and Sharon spent a night together and Sharon fell pregnant.

During her pregnancy, Sharon had a DNA test done which proved that Phil is not the father.

On the EastEnders 35th anniversary week, Sharon gave birth to her second son. But her joy was short lived as the same day she was given the news her oldest son Dennis had died in the boat crash.

Struggling with grief, she left her newborn in the care of Keanu’s mum Karen, who named the tot.

But viewers are still convinced Phil is really Kayden’s dad.

Could Kayden be Phil’s son?

In a Digital Spy forum one fan wrote: “Now that Sharon has given up the baby to his grandmother Karen, then surely there’s no reason why Karen cannot just have the baby live with Keanu for good. She can just go to where Keanu is now living and hand over his baby to him.

“Everybody will be happy. What do you think?”

One fan replied saying: “I like Sharon but I don’t want to see her lumbered with a baby. So I hope Keanu gets custody of Kayden and it leaves the door open for both of them to return in future. Unless there’s a twist that Phil is the father?”

A second fan said: “I still think there is a chance the baby is Phil’s. It will be used as a catalyst for a Phil/Sharon reunion, because Phil ‘want’s his family back’.

“There is a reason why Kayden is still on the Square when he could have easily been given to Keanu off-screen.”

Kayden going to live with Keanu?

A third added: “True. Keanu was devastated at the prospect of both Kayden and Peggy growing up without him in their lives. As Sharon renounced Kayden you’d think Keanu would have jumped at the chance to raise his son and at least be there for one of his kids.

“The fact this hasn’t happened and they’re keeping Kayden on the Square with Karen makes me think it will turn out he’s Phil’s and Phil and Sharon will take him back when they find this out.”

Another fan commented: “Still think he will turn out to be Phil’s.”

Do you think Kayden is Phil’s son? Leave us a comment on our Facebook page @EntertainmentDailyFix and let us know what you think of this story.