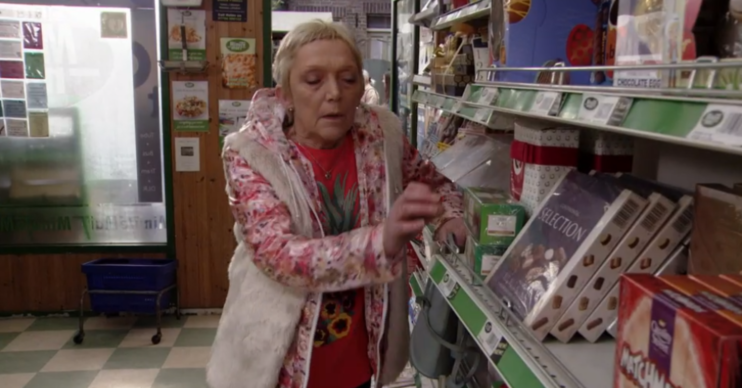 EastEnders fans pointed out a blunder in Tuesday night’s episode (May 12) as they spotted Tesco brand chocolates in the Minute Mart.

In last night’s visit to Walford, Jean was clearly feeling unwell. As she ran off from her friend Shirley, she stumbled into the Minute Mart.

Jean held onto the shelves for support, clearly unwell, but viewers ended up getting distracted by one of the products for sale.

As Jean grabbed onto one of the boxes of chocolates, fans noticed they were actually Tesco own brand.

I thought that too😂😂 pic.twitter.com/pqQKdDzrL6

What happened with Jean?

After Jean left the Minute Mart, she went back out onto Albert Square.

Meanwhile, Shirley Kush and Tina all tried to look around for her. But soon she was found by Max Branning.

As Max walked by the market, he saw Jean on the floor having a seizure. What’s happened to her?

Worried about her behaviour, Kush and Shirley started to sneak her pills into her food and drink. But is it the reason for her seizure?

In next week’s episodes, Tina calls an ambulance. Seeing what happened, Jean’s nemesis Suki steps in to try and help.

However, when the ambulance arrives Suki clocks that everything may not be as it seems.

Over the last year, Jean has been battling cancer. Just a few months ago she was told that the chemotherapy has worked.

But after her boyfriend Daniel, who also had cancer, learnt she was going to be okay, he died leaving Jean devastated.

After his death, she learnt her new ‘friend’ Suki had been lying about her cancer diagnosis, which is what led her to stop taking her medication.

But what has caused her seizure?