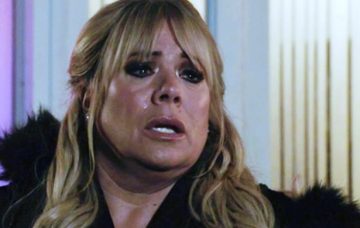 EastEnders viewers have lashed out at the BBC soap for ‘ruining’ Sharon Mitchell and turning her into an “insipid shopaholic”.

The character has been a fan favourite ever since the show started way back in 1985, but some believe scriptwriters have changed her from a “brilliant character” into a caricature.

Sharon, played by Letitia Dean, has been central to some of the biggest storylines in the long-running soap.

Her dad ‘Dirty’ Den Watts was one of the most famous villains in soap history, while her marriage to Grant Mitchell and subsequent affair with his brother Phil had viewers gripped.

She’s had a fling with Ian Beale and married her adoptive brother, Dennis Rickman – who was fatally stabbed in the heart when she was pregnant with his son.

More recently, the matriarch has been having a passionate affair with much younger lover Keanu Taylor behind the back of husband Phil.

We’re not actually sure she has time for shopping amongst all the drama!

But, during a debate on Digital Spy Forums, fans began a character assassination worthy of an EastEnders plot line!

One soap fan suggested a “ghost of Sharon” episode to rival that of Ian Beale in 2014’s Children In Need.

They wrote: “Who thinks it’d be a good and fun idea to do the same this year, but with Sharon?

“I can see appearances from Angie, Pat, Dennis – maybe even Ronnie and Roxy! I would also include Peggy, but given Barbara Windsor’s current situation maybe it’s unlikely.”

However, one follower blasted: “Maybe the ghost of old Sharon could turn up, who was a brilliant character and not this insipid shopaholic we have now.”

Also on the forum, another fan said: “I would rather they got rid of Sharon. I don’t care that she is an original, she hasn’t been good in over a decade now.”

However, Sharon does still have her fans with numerous Twitter accounts dedicated to her and many viewers wondering whether the blonde bombshell will choose husband Phil or young lover Keanu when he returns from Spain.

Are you a fan of Sharon Mitchell? Leave us a comment on our Facebook page @EntertainmentDailyFix and let us know what you think!