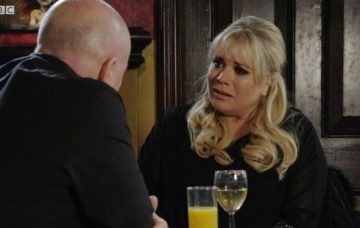 Pregnant at 48? Well it's not impossible!

EastEnders fans have reacted with anger to the leaked spoiler suggesting Sharon Mitchell will become pregnant at the age of 48.

A recent report has confirmed fan theories that the Walford favourite will soon discover she’s expecting a baby.

And viewers have slammed the idea as “ludicrous”, “crazy” and “unrealistic”, while others have even threatened to stop watching altogether.

According to The Sun, the veteran character – played by Letitia Dean – will become pregnant, but won’t know whether the baby is husband Phil Mitchell’s or lover Keanu Taylor’s.

And he’s going to go on a “bloody rampage”.

And, more importantly perhaps, will Sharon keep the baby? And will she stay with the daddy (whoever that may be)?

However, fans are unconvinced by the plot, and have blasted inconsistencies in the storyline after Sharon’s son Denny was thought to be her ‘miracle baby’.

Viewers know that Keanu is 19, almost 30 years younger than Sharon.

It’s true that she would be considered an ‘older’ mum, but it is certainly not impossible for a maturer woman to get pregnant, especially during a ‘spike’ in her fertility before the menopause.

However, her first born Denny – from her previous relationship with her adoptive-brother-turned-husband Dennis – was already considered her miracle baby after years of fertility issues.

Who else won't be watching @bbceastenders anymore now they have completely ruined a storyline?! Sharon pregnant with Keanu? Give us a break .. not watching it's ridiculous #EastEnders

Sharon was stunned to discover she was pregnant on Christmas Day 2005, after believing she couldn’t conceive.

One viewer tweeted: “Who else won’t be watching @bbceastenders anymore now they have completely ruined a storyline?! Sharon pregnant with Keanu? Give us a break… Not watching. It’s ridiculous. #EastEnders.”

Another said: “Sharon pregnant? It will be a bloody miracle!!”

A third added: “Sharon is too old and Dennis was her miracle baby.”

Over on Digital Spy Forum, one user said: “I’m done with Sheanu if another baby is where they’re taking it.

“It was a miracle Sharon was able to even have Dennis because of complications from her miscarriage and, anyway, wouldn’t the chances of Sharon naturally getting pregnant at her age be like 100,000 to 1?”

“Predictable tosh,” slammed another, while one more added: “Between this and the Corrie quadruplets nonsense, daft baby plots seem to be very much in soap vogue at the moment.”

Others fans saw the funny side and “couldn’t wait for Phil to find out” with one saying: “Only good thing that will come from this is psycho Phil at his best.”

One joked: “Keanu will have more kids than his mother by the end of next year at this rate.”

“He’s replacing Jack as the person who knocks up Mitchells as Jack’s no longer into the Mitchell clan,” noticed another.

Some branded Sharon a “terrible mother” and declared she shouldn’t have any more children.