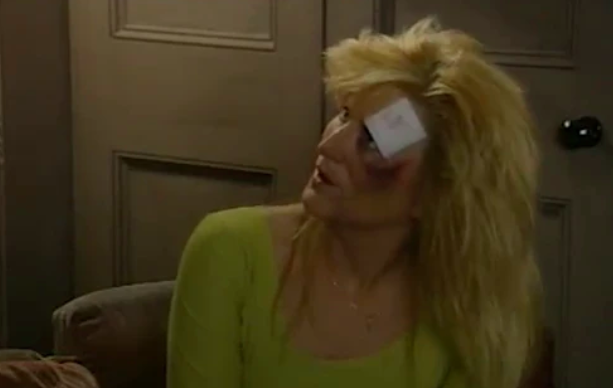 And she looked SO different!

Viewers of EastEnders were left shocked this week, when they discovered that actress Linda Henry had appeared on the show BEFORE joining as Shirley Carter.

Those watching old episodes of the BBC soap on the Drama Channel saw the actress from a couple of episodes she appeared in from the early 90s.

In 1991 and 1992, Linda starred as Mandy Salter’s mum Lorraine, a prostitute who used to beat up her daughter.

Just realised Linda Henry (Shirley Carter) was in EastEnders before as a different character.

She first appeared when Pat Butcher, trying to drink her way through problems in her marriage to Frank, decided to go to a bar where she met Lorraine.

In 1992, Lorraine’s troubled daughter Mandy arrived in the Square only to be disowned by her mum.

Lorraine returned to Walford in March 2012, played by a different actress – this time Victoria Alcock.

Sadly, the character came to a tragic end when she died of pancreatitis.

Another said: “Linda Henry making pre-Shirley Carter appearance in an EastEnders episode from 1991 on the Drama Channel today. #EastEnders.”

A third added: “Just realised Linda Henry (Shirley Carter) was in EastEnders before as a different character. Have there been any other actors that have played more than one role in the show?”

“Watching EastEnders and who pops up but Shirley Carter,” said one more.

@dramachannel watching eastenders and who pops up but shirley Carter

In fact, there are several actors who have appeared more than once in the soap as different characters.

Lorraine Stanley, for example, who currently plays Karen Taylor, had previously played Thelma Bragg just a year before on the show.

She played the mother of Jay Brown’s underage girlfriend Star.

These days Linda, 56, is known as the no-nonsense landlady of The Queen Vic after joining the soap in 2006.

This month marked the 13th anniversary of her permanent stint on the show.

Who is your favourite EastEnders character past or present? Leave us a comment on our Facebook page @EntertainmentDailyFix and let us know what you think!