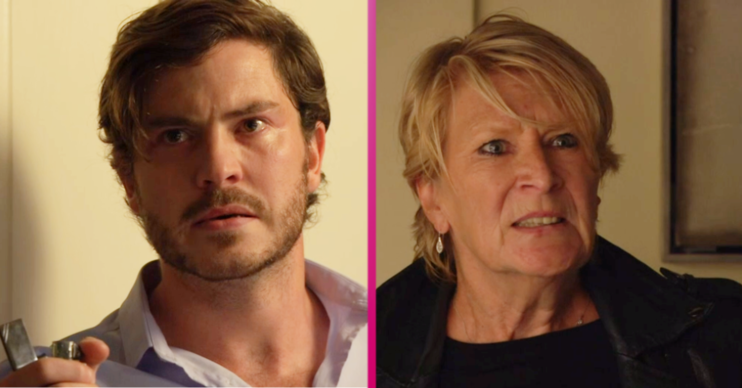 EastEnders: Fans shocked as Gray tries to kill his kids in horrific scenes

Gray is struggling with the guilt of killing Chantelle

EastEnders fans were shocked as Gray tried to kill himself and his children in last night’s episode (Thursday, October 15).

A few weeks ago, Gray killed his wife Chantelle. The hairdresser was trying to leave her abusive husband and during an argument he pushed her and she fell on to the dishwasher, which had a knife facing upwards.

Instead of calling for help immediately, Gray got himself an alibi by walking around the Square before returning home, pretending to find her and calling the emergency services.

In this week’s scenes, Gray has been feeling guilty about what he did, however his friends believe it to grief.

Last night, Whitney was found not guilty of killing Leo King. As Whitney and Sonia celebrated, Gray looked as if he was about to confess to what he had done.

But when he was interrupted by his colleague, he told her he wouldn’t be returning to work.

Later, he told his children Mack and Mia that they would see their mum Chantelle again when they woke up.

Meanwhile, Linda told Shirley about Gray’s outburst and Shirley wasn’t happy that he took his anger out on her daughter-in-law.

Later, Gray turned on the gas and held a lighter in his hand. However, Shirley was soon banging on the door, demanding to talk to him.

She quickly realised she could smell gas and saw what Gray was planning.

Shirley talked to Gray and told him she had once been in a dark place and he wasn’t thinking straight.

She managed to convince him not to do it and he dropped the lighter before breaking down in tears. But viewers were horrified by the scenes.

Oh sweet jesus. Gray is planning on killing the kids and himself…
Please don't be true #EastEnders

Whilst EastEnders haven’t said whether Gray will confess to Chantelle, it looks like he is struggling to hide his guilt.

Do you think Gray will tell the truth?