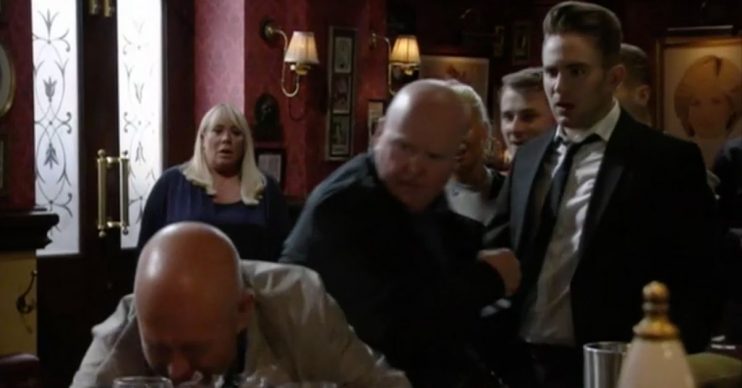 Violence is never okay, but...

The Walford hardman delivered what some fans called “an epic punch” after Jonno attacked his son Callum for being gay.

Read more: EastEnders SPOILERS: Martin in danger as he returns

On Tuesday night (October 1), Stuart was left seething when his nasty dad Jonno turned up in Walford.

Despite getting a frosty welcome from his eldest son, Jonno decided to stick around and later saw his other son Callum on the Square, where he demanded to know why his wedding to Whitney was cancelled.

Stuart and Whitney both tried to cover for Callum, knowing that his homophobic dad wouldn’t like the news one bit.

But the news eventually came out when Jonno interrupted Callum and Ben having a chat in the Queen Vic.

When Jonno once again asked Callum why he hadn’t married Whitney, Callum bravely told his thug dad he was gay.

He said: “I ain’t interested in being tough, making other people feel small, that’s your idea of being a man.

“Some other people taught me it’s much harder making people feel big, worthwhile and loved.

“You’ve never done that, you haven’t got the strength. Neither did I for 28 years but now I have. The reason me and Whitney never got married dad is because I’m gay.”

When vile Jonno called his son a “a disgusting, muck-loving faggot”, Phil stepped in to defend Callum.

Despite previously having his own concerns over son Ben’s sexuality, Phil did what everyone else wanted to do and punched Jonno on the noggins. Yeeeees!

As Jonno lay on the floor of the Vic nursing what looked like a broken nose, Callum and Ben were able to escape outside and express their love for each other with a passionate kiss.

Fans were overjoyed with Phil for punching Jonno’s lights out, with one tweeting: “I have never been more proud of a fictional character in such a realistic situation. But also watching Phil Mitchell punch that homophobe in the face was GOLD! #Mitchelled #EastEnders.”

Another said: “Wow. What a punch!!!!! Phil defending Callum there was fantastic. #EastEnders.”

“YES! Go Phil, I’ve been waiting all episode for someone to punch him one,” said one more.

Omg best episode of #EastEnders I’ve seen in forever! #Ballum and that punch didn’t think Phil still had it in him lol https://t.co/15QvcJJPw4

YES ! Go Phil, I've been waiting all episode for someone to punch him one @bbceastenders #EastEnders

Wow. What a punch!!!!! Phil defending Callum there was fantastic. #EastEnders

But also; watching Phil Mitchell punch that homophone in the face was GOLD! #Mitchelled #Eastenders @bbceastenders

Phil, the old geezer still got it That punch was epic #EastEnders

Over on Digital Spy Forums, one elated viewer wrote: “I tell you what, I cheered tonight as Phil Mitchell – not the soap’s nicest man at the best of times – sorted out Callum and Stuart’s old man proper with his legendary left hook!”

Another added: “I think that will go down as an iconic moment in the Vic! Phil Mitchell was trending on Twitter so looks like viewers felt the same way.”

“I got a massive dose of satisfaction watching that. Well done,” said one more.

Is this the last we’ll see of Jonno Highway?