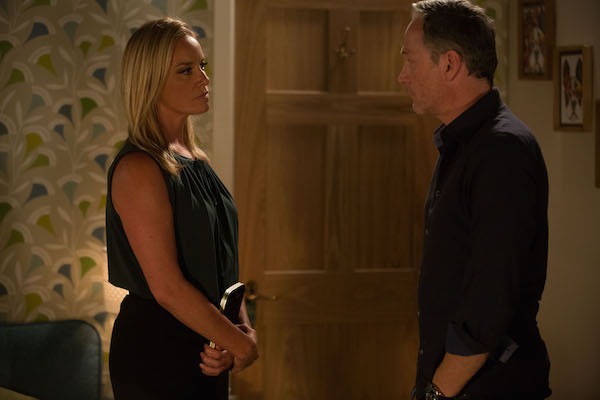 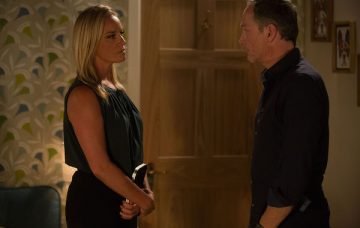 Just when you thought EastEnders had a happy couple on the verge of committing to each other, soap writers have thrown a spanner in the works…

And it’s clear there’s some seriously unfinished business between them.

While Jack has lots of fans – yes, those topless scenes help – BBC viewers seemed TOTALLY behind Mel and Ray’s chemistry.

Is Jack going to have his heart broken again…?

Things didn’t look good when Ray arrived at Mel’s doorstep under cover of darkness, while an unsuspecting Hunter slept upstairs.

After Ray insisted he was a changed man, and no longer working a dangerous job undercover, Mel defiantly told him it was “too late” and she was over him.

That lasted all of about four seconds, as she quickly drew him in close for a full-on snog.

It’s clear that Ray arriving in Walford is terrible timing for Mel, as she’d just got her life back on track.

But is she really in love with Jack – or does she still have feelings for Ray?

And is her ex all he seems?

Fans LOVED the new character so much, with one writing: “Mel and Ray already feel more exciting than her and Jack.”

Hopefully she’ll stay with Ray. Jack is only meant to be with Ronnie!!! #eastenders

Mel and Ray already feel more exciting than her and Jack, but I hope they don't wait too long to reveal their past and we don't get months of vague conversations. #EastEnders

Anyone thinks that Ray is quite dishy in #EastEnders ?

@seanmahonactor truly Liking your scene's and its only been a couple of day's since Ray returned looking forward to seeing what's instore #EastEnders pic.twitter.com/K1eMXzK9Uo

Another said: “Truly liking your scene’s and its only been a couple of day’s since Ray returned looking forward to seeing what’s instore.”

A third tweeted: “Thought I was into Mel and Jack until Mel and Ray….”

However, Jack’s fans couldn’t be swayed, with one typing: “Why have a slice of Ray when you have Jack pie at home?”

And one greedy soap fan wrote: “To be fair, I wouldn’t kick that Ray out either. Go on Mel. You can have a Jack AND a Ray!”

Meanwhile, plenty of viewers saw a resemblance between Ray and Mel’s late-husband Steve Owen. Do you see it?

Jack or Ray? Who has more chemistry with Mel? Leave us a comment on our Facebook page @EntertainmentDailyFix and let us know what you think!