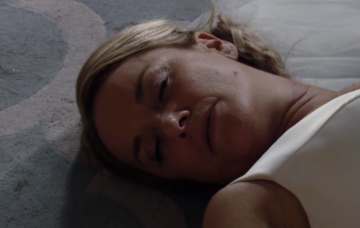 Mel Owen 'came back from the dead' on New Year's Day - sound familiar?

On New Year’s Day, the climax to Mel Owen and Ray Kelly’s ‘sham’ relationship took place – but the circumstances seemed awfully familiar to viewers (with an emphasis on awful).

In fact, fans felt cheated and patronised as the BBC soap seemingly bought Mel back from the dead – just a week after the EXACT same thing happened to Alfie Moon on Christmas Day.

Last night (Tuesday 1 January), shady Ray was arrested on suspicion of bigamy – but not before a tense double episode in which he appeared to kill Mel.

Viewers saw Ray confront his fiancée after discovering that she knew all about his other lives.

In a heated showdown, the undercover copper strangled his bride-to-be with the veil of her wedding dress and left her on the living room floor before heading off to the church.

TV fans believed Mel had been left for dead, until she arrived at the ceremony wearing a white neck scarf to hide the bruising.

As she lifted her veil, she said with a smirk: “What’s wrong? You look like you’ve seen a ghost.”

She then told Ray that she’d show everyone the bruises on her throat if he didn’t marry her, revealing that she wanted to get hold of his money.

The pair then married each other, saying their vows with a deadly glint in their eyes.

‘Til death us do part suddenly has a more potent meaning, when the groom tried to kill the bride just minutes beforehand!

After the ceremony, Ray’s other two wives Maddie and Nicola arrived at the church with the police who arrested the conman for bigamy.

But fans were incredulous that the plot was so similar to EastEnders’ Christmas Day twist, when Alfie was accidentally thrown down a flight of stairs and presumed dead.

Not only did he ‘come back from the dead’ but he also had the energy to abduct his daughter Cherry and go on the run – despite a bleeding head wound.

Mel also looked surprisingly sprightly, despite having recently been choked to near-death!

Fans were quick to call out the plot, with one typing: “Ugh, isn’t this exactly what happened last week on #eastenders? First Alfie and now Mel.”

#Eastenders how many dead bodies are gonna come back to life ??
Alfie then Mel …. c’mon script writers you can’t keep flogging the same dead horse ? !!!

#EastEnders Alfie Mel who's next pic.twitter.com/fh2iNwlzUg

Surely Mel and Alfie can't come back from the dead?! Who next Peggy? #EastEnders

No way is Mel dead. Another Alfie situation. Same stunt twice in a week. Really working the plot skills there #Eastenders writers 🙄

So Christmas and New Year #Eastenders. Alfie is dead, then he isn't. Mel is dead, then she isn't. I see a pattern here. And lazy, unimaginative writing

Another wrote: “People have a thing about hiding bodies behind doors this festive season in Walford  except most of the time those bodies are well and truly alive!”

A third said: “How many dead bodies are gonna come back to life ?? Alfie then Mel …. c’mon script writers you can’t keep flogging the same dead horse ? !!!”

“No way is Mel dead. Another Alfie situation. Same stunt twice in a week. Really working the plot skills there #Eastenders writers,” moaned another.

One unhappy viewer thought the plot was so lame, they wrote: “So Christmas and New Year #Eastenders. Alfie is dead, then he isn’t. Mel is dead, then she isn’t. I see a pattern here. And lazy, unimaginative writing.”

Spoilers warn us that this isn’t the last we’ll see of Ray, as the week promises a dramatic showdown between Ray, Mel and her son Hunter.

But will anyone die? And stay dead!?

Did you enjoy the storylines or agree with fans that it’s lazy writing? Leave us a comment on our Facebook page @EntertainmentDailyFix and let us know what you think!