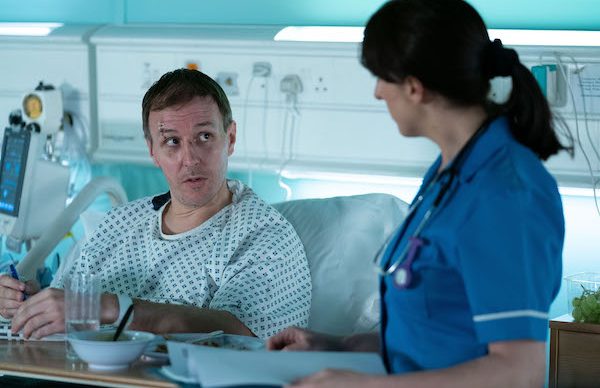 How far will she go to protect ex-hubby Martin?

Viewers of EastEnders fear that Sonia Fowler will go to extreme lengths to protect her ex-husband Martin Fowler – including stealing from her own family.

Viewers know that the nurse is deeply in love with Martin and, despite the pair being divorced from each other, they are now in a relationship again.

Read more: EastEnders SPOILERS: Major character to be killed off for 35th anniversary

On Tuesday (January 14), their far-from-idyllic family unit was threatened when Martin’s hit-and-run accident came back to haunt him.

Whilst on a job with Tubbs last year, Martin knocked down and almost killed George – who is now recovering in the same hospital that Sonia works in.

When George pulled through from his coma, Martin worried about how much he’d remember… And when Sonia went to speak to him during a shift, she was alarmed to discover he was able to identify Martin.

While Sonia was concerned about Martin facing jail, it seems George is more interested in getting his hands on some cash…

Realising Sonia’s connection to Martin, he told her he wants £10,000 or he’ll report Martin to the police.

And the blackmail couldn’t come at a worse time for the family, just months after Bex’s suicide attempt.

Now viewers fear Sonia will attempt to STEAL the money from her lifelong friend Dot Branning, who recently inherited money from the late Dr Legg.

Those soap fans who watched the explosive Christmas and New Year episodes will know that Sonia was able to log in to Dot’s online banking, and has already attempted to withdraw £5,000 from her account.

Will she do the unthinkable and steal from Dot to save her man?

One fan tweeted: “She’s going to use Dot’s money, isn’t she?”

Yes that explains why now

Another said: “She’s going to steal Dot’s money I reckon.”

“Dot, keep on an eye on your bank account,” warned one more, and another said: “Please don’t tell me that Sonia is going to steal Dot’s money to get out of this. Oh, dear…”

However, others feared Sonia might actually KILL the blackmailer, or arrange for him to be killed.

One said: “Hmmm… Sonia is a nurse. I’m sure there’s a lethal injection that she can give him.”

Another said: “Martin, Phil or Ben will hush him permanently.”

A third added: “Cheaper to smother him.”

“Damn! Martin might have to kill this guy for real,” said one more, while another added: “Ben Mitchell can kill him in return for Martin’s favour.”

What lengths will Sonia go to protect her family? And is Martin worth protecting?

Do you think Sonia will steal from Dot Branning to save Martin’s skin? Leave us a comment on our Facebook page @EntertainmentDailyFix and let us know what you think!