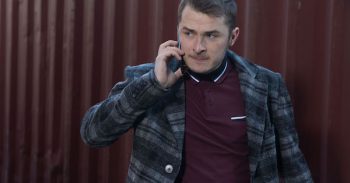 And Lola is the prime suspect

It’s fair to say Ben Mitchell has rubbed more than a few people up the wrong way since his return to EastEnders last month, so it’s no surprise viewers are now predicting a huge whodunnit storyline with him at the centre.

Writing on a Digital Spy forum one user suggested a potential storyline for the character could put him at the middle of a “Who shot Ben” plot that would mirror that of his father, Phil Mitchell.

Phil was famously shot in 2001 with several suspects in the running. It was eventually revealed that his ex, Lisa Fowler, had pulled the trigger.

With Ben back in town and clashing with pretty much everyone, fans think he could suffer the same fate as his father.

One user commented: “I would love a ‘who shot Ben’ storyline, as he really deserves it.. the difficulty is choosing who does it! He has made a lot of enemies in a short time!”

Commenters on the thread have voted that Lola would be the most likely to do it.

Ben is currently using her in his plan to bring down his dad, and she’s getting angrier and angrier at Ben’s interference in her life.

One fan wrote: “His controlling way with her could push [Lola] over the edge!”

“Lola and Rainie are the only ones I could see doing it if they’re pushed,” added another.

Rainie was a popular choice among other users, with one writing: “I’m guessing Rainie though. Phil has too much of a faaamily conscience, Lola wouldn’t because of Lexi wanting to get to know her father.

“I’m thinking Rainie because of the way he was with her directly before Max returned with his threatening behaviour and taking of the cars.”

Another suggestion was slightly more off the wall, with one fan saying it could be Heather Trott’s son, George!

“I say George Trott (revenge for killing his mum),” they wrote.

Ben went to prison for killing Heather back in 2012. George, Heather’s son with Darren Miller, who lives with his father, would be nine years old by now – possibly a little too young to be out for revenge with a gun.

Other names in the frame include Keanu, who Ben is not getting along all that well with, stepmum Sharon, brother Jay or businessman Max Branning.

Ben’s own dad, Phil, came in second behind Lola in the voting, although one fan pointed out:

“Phil would never shoot his own son, no matter what Ben does to him.”