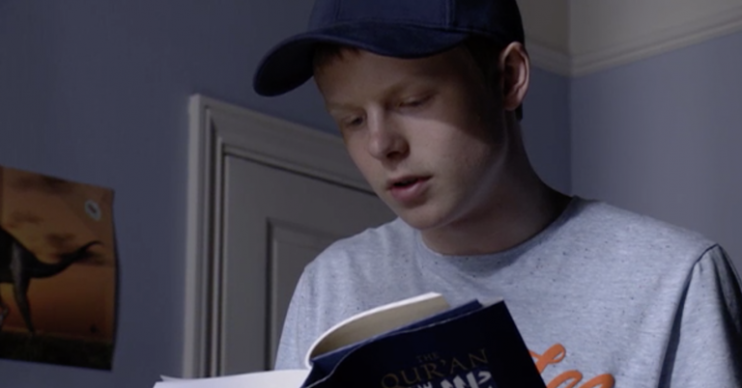 He is exploring the Islamic faith

EastEnders fans have applauded the BBC soap for focusing on the positive aspect of Islam, in a storyline which kicked off last night.

Some viewers feared that Bobby Beale had been ‘radicalised’ while in prison but the opposite is true; he begins to find peace with past events while exploring the Islamic faith.

On Thursday (July 11), Bobby met up with Imran, who he befriended while at a Young Offender’s Institute, and later received a gift from him – the Qur’an.

Viewers saw Bobby meet his friend at the park after Kathy’s latest attempts to help him settle back into Walford with a home tutor went pear-shaped.

Imran encouraged Bobby to get along with his loved ones while he sorted himself out, so Bobby returned home agreeing to look over the list of tutors with Kathy.

In the coming weeks, viewers will see Bobby explore his new faith and how it positively affects him – offering Bobby support and helping him find peace with traumatic past events.

As Bobby continues to settle into life back in Walford, albeit facing many challenges from his past, Bobby finds much support and encouragement from many close by.

EastEnders has confirmed they are working with the Muslim Youth Helpline on the storyline.

“In a time where young British Muslims see their faith overwhelmingly represented in a negative way, it is heartening to see Islam portrayed as a positive influence in Bobby’s life.”

Jon Sen, Executive Producer of the BBC soap, added: “We are thrilled to be working with the Muslim Youth Helpline on a storyline which serves to challenge preconceptions and prejudices about the role of faith in young peoples’ lives.

“Bobby Beale’s story will show how a young boy uses religion to help find peace and give his life meaning, structure and purpose. We hope this storyline will demonstrate the positive impact of religion in modern society.”

And fans have praised EastEnders for ‘going against the grain’.

Writing on Digital Spy Forums, one wrote: “I like the sound of this storyline, it’s original and goes against the grain, but makes sense considering Bobby’s past.

“Also, this means they really are trying to redeem Bobby which is important since he is a legacy character and has long term potential, and several other legacy Beales have been needlessly killed off.”

Another said: “I kind of thought they might have gone the other way with it, but this sounds like going down the positive will be better.”

A third said: “This sounds really interesting. Well done EastEnders for thinking of this.”

“I’m interested in seeing religion portrayed in a positive way for once,” commented another. “For some people, faith is their way of finding peace and acceptance and I am interested more in that than seeing someone become hateful and using religion as a reason to be a nasty person. I’m keen to see this storyline play out.”

Others called it “brave”, “interesting”, “original” and a good “twist”.

Good to see positive representation of the #Muslim faith as one that heals and reforms you!

Imagine Bobby turns to Islam, not because he has been radicalised and doesn't want to join ISIS… #EastEnders pic.twitter.com/JIItM2x2GQ

Caught up with EastEnders and I am SO hoping this can be a positive storyline about Islam! It would be awesome for Bobby to convert and for people to see the good that religion can do for people.

The troubled teen, now played by Clay Milner Russell, has just returned to Albert Square after serving time in a detention centre for killing his sister Lucy Beale in 2014.

Fans were horrified to learn that Bobby was the one to murder Lucy as the soap’s 2014 ‘whodunnit’ reached its gripping climax.

A flashback episode saw the schoolboy hit his sister over the head with her jewellery box – and his stepmum Jane helped Bobby cover up the crime.

Bobby was able to get away with what he’d done for a short time, later leaving Jane wheelchair-bound when he launched a brutal attack against her.

He was finally sent to the detention centre in June 2016, being handed a three-year sentence for murder and attacking Jane.

What do you think of Bobby Beale’s new storyline? Leave us a comment on our Facebook page @EntertainmentDailyFix and let us know what you think!