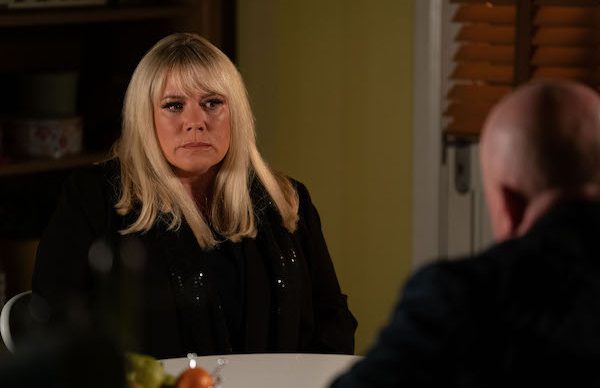 She's been in Walford since the beginning!

Sharon Mitchell is one of the most iconic characters in EastEnders, and one of few who have been in Walford since the very start.

So it’s perhaps not surprising that fans of the BBC soap would hate to see her go.

This week, soap fans have shared their panic at rumours that actress Letitia Dean, who has played Sharon since 1985, is leaving.

The speculation comes hand in hand with EastEnders spoilers which tell us that Sharon’s husband Phil Mitchell is about to discover the baby his wife is carrying is NOT his.

Of course, viewers know that Sharon had a passionate affair with Phil’s employee Keanu Taylor and got pregnant as a result of the fling.

As if that wasn’t explosive enough, Phil’s daughter Louise – who is now dating Keanu – is also pregnant with Keanu’s baby.

In scenes due to air over Christmas, Phil will discover the truth. But does this mean Sharon is forced to flee Albert Square?

Writing on Digital Spy Forums, one fan wrote: “Letitia Dean to QUIT EastEnders?! That’s all I’m hearing about. Is it true? What’s going on?”

Another said: “Apparently she is thinking of taking a break after the 35th anniversary [in 2020] according to another thread but it’s just rumours.”

A third added: “Sharon always runs away when it’s revealed she’s had an affair. She’ll come back and do the whole thing again to someone else.”

“I hope this is all lies or that it’s just a short break,” added one more worried fan. “A Sharonless EastEnders is an EastEnders not worth thinking about.”

One believed a break was inevitable, with one saying: “I’m not totally shocked. There’s no way Phil is going to accept her in his life after he learns the truth, so she is back to being a single mum.”

One user lamented: “I hope it’s not true, Sharon is the Queen of Walford.”

Others believe Sharon will always come back, with one joking that “Letitia has her own revolving door at the BBC” and another added: “I don’t think Letitia will choose to leave for good because she said numerous times she wanted to stay on the show for a very long time until she’s retired.

“When she left last time she said she missed it a lot. If the rumours are true she’s taking a break, the length shouldn’t be longer than 12 months, in my opinion.”

One more superfan posted: “Please don’t let this be true. I love Sharon! I can understand if it’s a short break, say three months, to let the dust settle after the reveal. Maybe to go and stay with Michelle. But not longer than that.”

Letitia hasn’t taken a break since she returned to the BBC soap in 2012.

Since she first appeared in the soap as part of the legendary Angie and Den Watts family in 1985, Letitia has left several times for extended breaks, but has always returned.

Would you miss Sharon Mitchell? Leave us a comment on our Facebook page @EntertainmentDailyFix and let us know what you think!