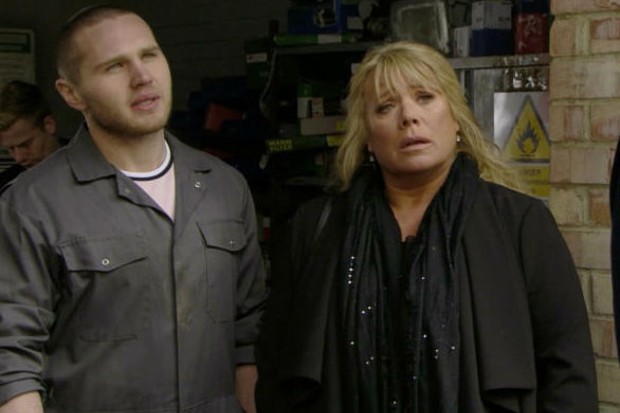 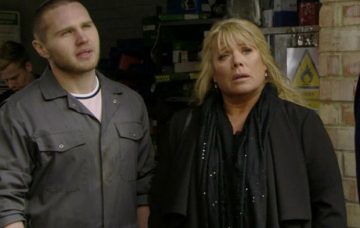 EastEnders fans “obsessed” as sparks fly between Sharon and Keanu

Sheanu or Karon? Which sounds better...?

The chemistry between Sharon Mitchell and Keanu Taylor is mounting – and (some) EastEnders fans are THRILLED by the prospect of an age-gap romance in Walford.

In fact, they are “obsessed” and “buzzing” about the upcoming affair…

"A crush never hurt anyone." pic.twitter.com/izxqhkd47Z

In last night’s visit to Albert Square (Tuesday 28 August), Sharon was left with a big decision on her hands…

Go home to husband Phil, or head towards a secret rendezvous with ‘crush’ Keanu.

The past few weeks have seen Sharon and Keanu drawn to each other more and more and finding any excuse to spend time together.

And Tuesday’s episode was no exception as Shazza slipped away for another secret visit with the object of her affections.

Sparks flew as she nursed his injured arm and it looked like the pair might actually give in to their affections… until Karen ruined the atmosphere by walking in.

Sharon, confused and conflicted between her head and her heart, ended up at The Vic – and fans were delighted when she finally confessed about her “crush” to Linda.

“It’s embarrassing. I feel a bit desperate,” she said.

So who should she choose?

Ok, am absolutely into the sexual tension between Sharon and Keanu. #EastEnders

Queen Sharon don’t need to feel desperate! She’s 51 this year and looks 18! She’s queen of youth and vitality and she’s gonna give Keanu the ride of his life. I cannot wait #eastenders pic.twitter.com/8Uvu5snIrB

What I thought you would be fun, seems to have chemistry. I am here for Sharon and Keanu. He looks like a young Mitchell brother. Love it. #EastEnders

Many fans are totally behind the fledging romance, with one typing: “Obsessed with Sharon and Keanu #EastEnders.”

Another called the pairing “cute”, while a third said: “Ok, am absolutely into the sexual tension between Sharon and Keanu.”

One approving fan even thought Keanu looks like a “young Mitchell brother” and we kinda see it!

While one boldly declared the coupling as the “affair of the year”.

However, others branded the relationship cringeworthy.

If Sharon and Keanu are going to hook up I'm gonna need plenty of notice. I'm barely over the time Pat and Patrick slept together. If I even get a hint of a shoulder pad strewn on the floor I'm out. #eastenders

Anyone else finding the whole Sharon and Keanu thing proper uncomfortable? #EastEnders pic.twitter.com/iMAPibkaWN

One said: “Sorry but sharon and keanu is just wrong on so many levels.”

Others said the flirting made them feel “uncomfortable” and like “vomiting”.

Well, thanks to the BBC soap’s brand new trailer, we know it’s only a matter of time before Sharon and Keanu start ripping each other’s clothes off.

Things haven’t been right with Phil for a while, but does this herald the end of their marriage?

And what will Phil do if he finds out about the affair? We’d better call a hearse for Keanu…

Do you approve of the upcoming affair between Keanu and Sharon? Leave us a comment on our Facebook page @EntertainmentDailyFix and let us know what you think!