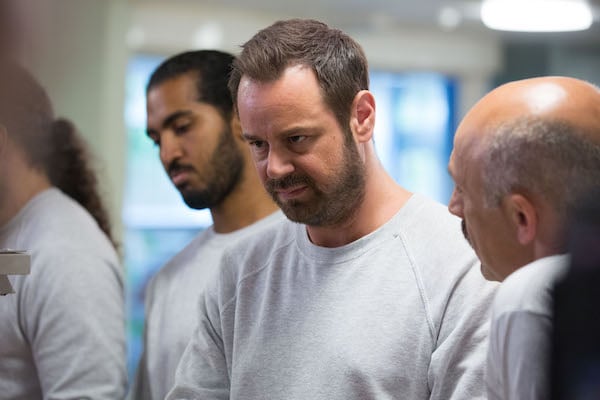 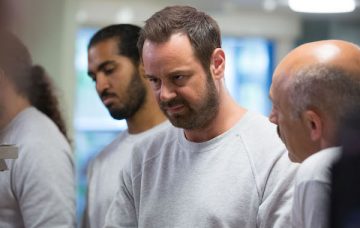 EastEnders fans in hysterics over “worst prison security guard ever”

Poor Mick is suffering behind bars...

Mick Carter is in deep doo doo, and things only seem to be getting worse for him…

The pub landlord is currently wrongfully imprisoned for the attempted murder of his frenemie Stuart Highway, and is at the mercy of the criminals around him.

And some fans have noticed that the security guards aren’t exactly at the top of their game – which could be seen as good luck or bad for our Mick.

Mick has been targeted by one of Stuart’s pals behind bars, so it might help to have a few vigilant prison guards around – but sadly some of them seem to be a bit dozy!

In scenes that aired last night (Tuesday 25 September), Mick was forced to do the dirty work of dangerous inmate Fraser.

And the staff at the prison seemed clueless as to what was going on right under their noses!

After Fraser spread a vile rumour amongst the inmates that Mick’s a paedophile, Mick was determined to clear his name.

But, after confronting Fraser, it became obvious that the hardened criminal wanted something in return – a favour.

He told the Walford favourite he had to meet up with a mystery woman called Tessa during visiting hours.

Horrifyingly for Mick, the woman knew where Ollie went to nursery and was prepared to threaten Mick’s son to get what she wanted.

With no option to say no, Mick was forced to take drugs from Tessa. Needing to make the relationship look authentic, Tessa kissed Mick passionately on the mouth – and passed him a packet of drugs.

Before she left, she threatened: “If you swallow it it will burst in your gut.”

Mick was then ordered to plant them on his new friend Bob, who is coming up to the end of his 15-year sentence.

In fact, he totally missed it when Mick moved the small package from his mouth to his pocket during the inspection!

Worst prison guard ever for not noticing Mick take the packet from his mouth.#EastEnders #MickInTheNick

That prison guard needs to be sacked 😂😂 #EastEnders

A third agreed, writing: “Worst prison guard ever for not noticing Mick take the packet from his mouth.”

But will Mick go through with the betrayal? Or put his son at risk by refusing to?

Do you think Mick will betray his friend? Leave us a comment on our Facebook page @EntertainmentDailyFix and let us know what you think!