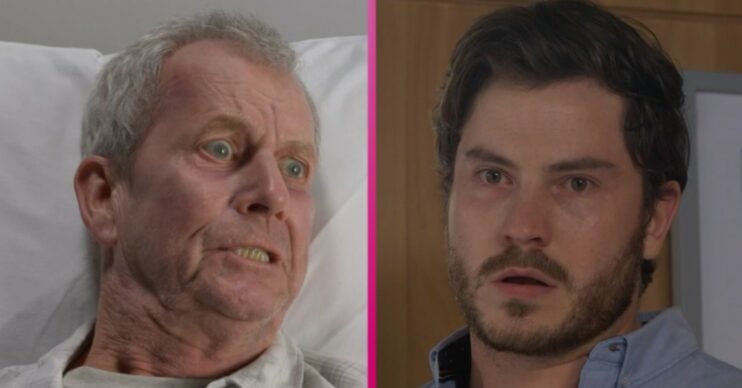 The abuser has had a shocking family secret exposed

EastEnders fans are horrified after it was revealed Gray Atkins abused his own mum.

And he has gone on to kill Tina Carter and Kush Kazemi since then.

He had previously explained how he was violent after growing up in a violently abusive home where his father terrorised him and his mother.

However in last night’s episode that was shown to be complete lies.

Instead it was revealed that Gray was abusive and had beaten his own mother.

Gray was called to his father’s death bed in the episode – and he confronted him.

Revealing Gray had broken his mum’s arm – and given her black eyes, his dad exposed the truth.

“We should have held you to account,” he said to Gray.

“We should have nipped it in the bud, but we should not have allowed you to disappear from our world to do who knows what.

“It’s tortured me, what brushing it all under the carpet might have allowed you to become. You still have your anger issues, don’t you?”

And it wasn’t long before his dad revealed he knows Gray killed Chantelle.

“I saw it online yesterday,” he said.

“I found out yesterday that your wife died a year ago in a domestic accident. I’m scared for you.

“I’m scared of what you will do Gray. How did Chantelle die? Tell me I didn’t make a mistake listening to your mother.”

However Gray didn’t confess to anything – and instead turned nasty on his dad.

“But what you’re saying is slander – you have no evidence. Must be the drugs you’re on, you’re not of sound mind. I hope you find peace and I hope it comes quickly.”

However EastEnders fans are in shock at the revelation.

One said: “Oh my God, did Gray hurt his mum?!!! The plot thickens, he’s a serial abuser, we knew. #EastEnders”

A second said: “#EastEnders So Gray was a spoiled little boy that hit his mum when he didn’t get what he wanted?

“What a pathetic human being he truly is. So disrespectful to his dying Dad there as well. Gray’s parents are not the problem, Gray Atkins is the problem.”

However a third said: “Oh wait, so this isn’t a poor Gray moment, it’s a ‘I used to beat my mum too’ revelation.