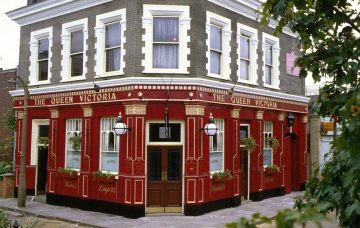 How much for two tomato juices????

Stuart Highway is nobody’s favourite person, but even the troubled Walford villain deserves to get a drink at his local boozer without having to get a loan out!

EastEnders fans were horrified last night (Thursday 28 February) when Mick Carter’s nemesis walked up to the bar in the Queen Vic and asked for two soft drinks – and was “ripped off” by barmaid Whitney Dean.

To be honest, it was a brave move turning up at the Walford pub at all, knowing how loathed he is by the Carter family – and barred from even entering the pub!

Knowing he wouldn’t be welcomed with open arms at the Carter-owned Vic, Stuart told an angry Linda that he was only visiting the pub to get Dot’s lunch as she hadn’t been feeling well.

For Dot’s sake, Linda let Stuart stay… But, after being charged, he might not want to visit again!

Despite being unwanted, Stuart ordered two tomato juices for himself and Dot, which Whitney unceremoniously slammed down on the bar.

She then entered the price of the juices into the till, and charged Stuart a whopping £4.90 – coming in at £2.45 per drink! We wonder if the tomatoes were shipped from Narnia?

Still reeling from an unpleasant encounter with Rainie, who doesn’t trust Stuart’s motives towards Dot (quite rightly), the bald thug paid up without questioning the cost.

Fans were quick to call out the extortionate prices, with one saying: “£4.90 for two tomato juices? And people reckon there is no difference in northern and southern prices! #EastEnders.”

Another joked: “£4.90 for two tomato juices? No wonder the #QueenVic only has about six regular customers and nobody ever seems to get [bleep]. #EastEnders.”

Four ninety for two drinks. The vic is a rip orf #eastenders

£4.90 for two Tomato Juices? No wonder the #QueenVic only has about six regular customers and nobody ever seems to get pissed #EastEnders

£4.90 for two tomato juices? And people reckon there is no difference in northern and southern prices! #EastEnders

“Four ninety for two drinks. The vic is a rip orf #eastenders,” slammed another.

One fan, however, believed the cost of the juices were “quite reasonable for London”.

We hope Stuart didn’t tell Dot the price of her beverage… She might have had another one of her funny turns!

Do you think Stuart is capable of hurting Dot? Leave us a comment on our Facebook page @EntertainmentDailyFix and let us know what you think!