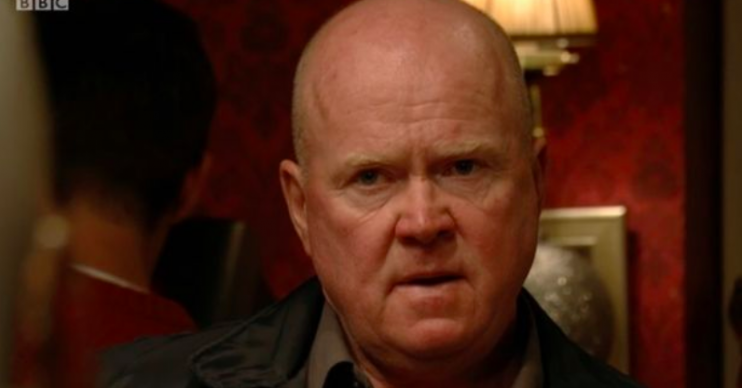 Phil Mitchell has finally realised that Sharon is carrying another man’s baby – and EastEnders viewers had “goosebumps” as the penny dropped.

Of course, we’ve all known for months, but Phil’s newfound knowledge means only one thing… Revenge!

On Thursday (December 12), Phil caught Sharon out in a lie, which made him question everything about his pregnant wife.

Fans loved seeing Phil happy at first, as he cracked a rare smile and celebrated becoming a grandfather to baby Peggy – but his joy was short-lived.

When he asked stepson Denny about his parents’ evening, the schoolboy told him there hadn’t been one…

Phil realised Sharon had been lying about her whereabouts the previous night, when she’d really been visiting Lisa at the hospital – but had told her husband she was at the school.

With the seed of doubt now in his mind, Phil checked the SatNav on his car to find evidence of where Sharon had actually been.

Walking back into the Vic, he casually questioned Sharon on the parents’ evening and, when she kept up the lie and pretended it had gone fine, Phil finally realised that Lisa had told the truth about her cheating.

This wasn’t helped by the fact that Shazza was laughing and joking with Keanu – the real baby daddy – and Jack Branning at the bar.

Sizzling with quiet rage, Phil took his son Ben aside and told him: “Sharon’s been lying to me.

“You know what that means, don’t you? It means that baby ain’t mine.”

Always knew it would blow up at Christmas. Certainly one of the best plot lines for a long time!

What an episode! Whitney saving herself and Phil finding out the truth! #eastenders at its best!

Phil's gonna explode like a volcano when he knows the whole truth. 😳😨🌋#EastEnders

Fans were THRILLED with the realisation, knowing it means an explosive Christmas on Albert Square.

One fan said: “Phil’s finally realised that the baby isn’t his! I cannot wait for Christmas! Literal goosebumps!!!”

Another added: “Always knew it would blow up at Christmas. Certainly one of the best plot lines for a long time!”

“What an episode! Whitney saving herself and Phil finding out the truth! EastEnders at its best!” said one more.

Spoilers reveal that Phil will go after the wrong man at first, when he targets Jack Branning.

But the real truth will out eventually…

Did you enjoy the episode? Leave us a comment on our Facebook page @EntertainmentDailyFix and let us know what you think!