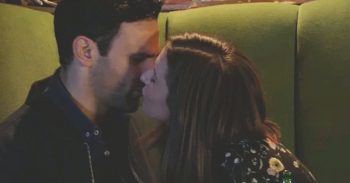 Do you think they'd make a good couple?

EastEnders fans have made their feelings very clear about the possibility of a romance between Kush Kazemi and Bex Fowler.

Last night (Thursday 21 March), they shared a kiss and viewers slammed the pairing as “ridiculous”, “weird” and “sickening”.

Soap fans were shocked when Bex make a move on her dad’s best friend Kush, after they shared a heart-to-heart in E20.

The pair seem to have been getting closer of late, with Kush recently becoming very protective over Martin’s daughter when he thought Stuart was acting inappropriately toward the 18 year old.

Meanwhile, Bex has clearly been developing feelings for the much older man.

During an emotional chat about Shakil’s death, Kush told Bex: “You’re the only one left around here who might understand and miss him like I do.

“You’re making a success of yourself and I’m proud of you!”

The moment was fraught with tension, and viewers weren’t impressed when Bex went in for a kiss.

Although Kush quickly disentangled himself from her, there’s undeniable chemistry between the pair.

But fans aren’t feeling the love at all.

One wrote: “Didn’t Bex learn anything from Mr Price? Nope to Kush and Bex. I miss Denise and Kush to be honest. #EastEnders.”

Another agreed, saying: “#EastEnders need to stop with this Bex/Kush storyline. It’s a tad creepy and Kush is one of the dullest characters on the show right now.”

Srs if Kush and Bex get together 🤢 #EastEnders

Didn't Bex learn anything from Mr.Price? Nope to Kush and Bex. I miss Denise and Kush tbh #eastenders

#Eastenders need to stop with this Bex/Kush storyline. It's a tad creepy and Kush is one of the dullest characters on the show right now.

Kush and Denise had possibly the most lowkey breakup in EastEnders history in order to have this weird relationship with him and Bex. Ugh #EastEnders

Bex & Kush would be weird together, he's the ex of her step-mum, dad to her step-sister, brother to her dead bf, she's the daughter of his mate etc #eastenders

A third added: “Look at Bex flirting her [bleep] off with Kush. Is he interested? She’s like more than 30 years younger than his last girlfriend. I mean, she’s his kid brother’s ex! #EastEnders.”

“Bex and Kush would be weird together,” another agreed. “He’s the ex of her step-mum, dad to her step-sister, brother to her dead boyfriend, she’s the daughter of his mate etc #EastEnders.”

Well, they do have a point! It’s certainly complicated…

Others said the scenes were “boring” and “nasty”, while one compared the union to a Corrie coupling, complaining: “Kush and Bex is a Peter and Tina level of cringe only #Corrie fans will understand #EastEnders.”

Viewers already know that Kush is the biological father of Martin’s stepson, Arthur, after a fling with his wife Stacey.

So if he got together with Bex, then Martin’s wife and daughter would both have slept with him, and with Martin’s temper being on the short side, it could spell disaster.

But will Kush and Bex be able to ignore their growing feelings for each other?

Do you think Kush and Bex make a good couple? Leave us a comment on our Facebook page @EntertainmentDailyFix and let us know what you think!