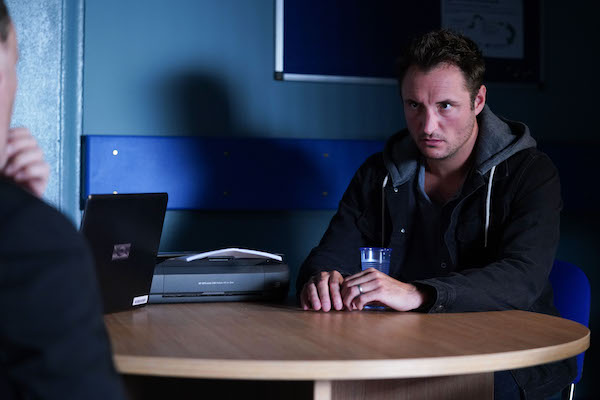 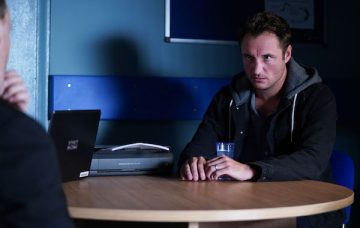 He threw some serious shade at Ruby's version of events

Martin Fowler has enraged EastEnders fans after giving his statement to the police about the night Ruby Allen was raped.

Viewers watched in horror as the market trader gave a drastically different account of the night in question compared to his wife Stacey.

And his account could have devastating consequences for victim Ruby.

After a pep talk from Stacey, Ruby agreed to report the rape to the police – who subsequently called Stacey and Martin in for questioning.

The couple were also at the school reunion, but left before the sexual assault took place.

However they gave drastically different accounts of the same evening, with Stacey describing Ruby as shy and clearly defending her friend.

Meanwhile, Martin said she was outgoing, having a laugh and flirting with the men. He also told the police about the photograph showing Ruby kissing Ross at the party.

With the police clearly having doubts over Ruby’s accusations, will Martin’s statement undermine her chances of justice?

Fans were livid with the character for betraying Ruby and going along with Matt and Ross’ accounts of the evening.

One blasted: “I am so proud of Ruby. However, if I was Stacey the way Martin has acted, I would bin him off right away.”

I am so proud of Ruby. However, if I was Stacey the way Martin has acted, I would bin him off right away.@louisalytton @laceyturner @jimmybye @bbceastenders #nowwatching

Oh Martin what have you done #EastEnders

Ffs Martin what you doing. #eastenders

Martin is such a weak gobshite. #Eastenders

Oh Martin what have you done #EastEnders

Another sighed, saying: “Oh Martin what have you done?”

A third added: “Martin is not going to look well after this whole #RubyRapeStoryline.”

One more viewer really kicked the boot in, typing: “Never trust Martin not to lie.”

Many predicted that Stacey and Martin’s marriage would be on rocky ground when she discovers that he gave police the picture.

Upcoming scenes on the BBC soap confirm fan theories that their differing loyalties will threaten to blow their relationship apart.

And will the police arrest Matt?

Do you think Martin was right to give the police the photo? Leave us a comment on our Facebook page @EntertainmentDailyFix and let us know what you think!