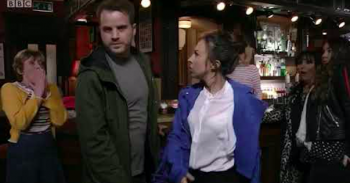 When Ruby Allen saw Sean Slater had returned to Albert Square, it was always going to get ugly.

And last night (Tuesday April 30), Ruby showed her disapproval at his reappearance by delivering him a brutal slap across the face.

Lifelong fans of the BBC soap will know that the pair have beef between them which goes back years – but does that mean he deserved to be slapped?

Viewers were fiercely divided over Ruby’s actions, with some saying Sean “deserved it” after everything he put Ruby through in the past.

Others said the slap was “physical assault” and “domestic abuse” and questioned why a victim of rape would think this behaviour was okay.

On Twitter, one said: “If Sean hit Ruby he would be labelled a woman beater. #EastEnders.”

Wtf Ruby, why did you slap Sean? #eastenders

can ruby stfu, not long ago she was raped and now she's abusing men slapping sean like that. (which counts as domestic violence btw) #EastEnders

Another said: “Not long ago, Ruby was raped and now she’s abusing men slapping Sean like that. Which counts as domestic violence by the way. #EastEnders.”

Meanwhile, on Digital Spy Forums, a debate raged on when one user said: “Why does Ruby think it’s okay to slap Sean across the face that hard? Surely that’s assault, and for someone who has been assaulted herself, she sure doesn’t care much about assaulting others. What’s worse is the writers think it was acceptable too.”

The user continued: “Just because you’re a female, it doesn’t make it okay to hit a male. Can you imagine if it was the other way around and Sean slapped Ruby across the face like that?”

Another agreed, saying: “I would agree that hitting somebody is never okay, no matter what the provocation. Also that women hitting men is portrayed as much more acceptable than a man hitting a woman much too often in soaps.”

When some defended Ruby’s actions, another argued: “So if someone sleeps with someone and pretends to be in love, that gives the other person the right to physically assault that person? So you would be fine with Phil punching Sharon for sleeping with Keanu?”

However others totally disagreed, saying Sean deserved it after everything he’d put Ruby through, recalling when he threw her dad Johnny’s ashes at her (after arguably causing his heart attack in the first place) and emotionally abusing her throughout their relationship.

One said: “I believe Sean got away without any assault charges after throwing Johnny’s ashes at Ruby, so it’s all swings and roundabouts really.”

Another said: “This is the same Sean who lied to get her into bed, pretended to be in love with her and then chucked her dad’s ashes in her face?

“We’re really making this about gender, instead of the fact that he treated her like a dog and a slap in return is absolutely nothing?”

“Sean gaslighted Ruby into sex and then threw her dad’s ashes in her face,” seethed another. “I absolutely do not give a rat’s [bleep] about him being slapped.”

One more added: “There is no comparison between a slap and having your father’s ashes thrown in your face. Ashes are worse… So much worse.

“People forget that Sean dated Ruby purely to fleece her. He never liked her. He liked her money. Then, at the end, he threw the ashes in her face.

“I don’t condone violence but I can’t say I blame her.”

Sean was briefly engaged to Ruby back in 2006, but his intentions for being with her were never genuine.

However, now Sean’s mental health is fragile, the tables have turned on him.

Do you think Sean deserved to be slapped? Leave us a comment on our Facebook page @EntertainmentDailyFix and let us know what you think!