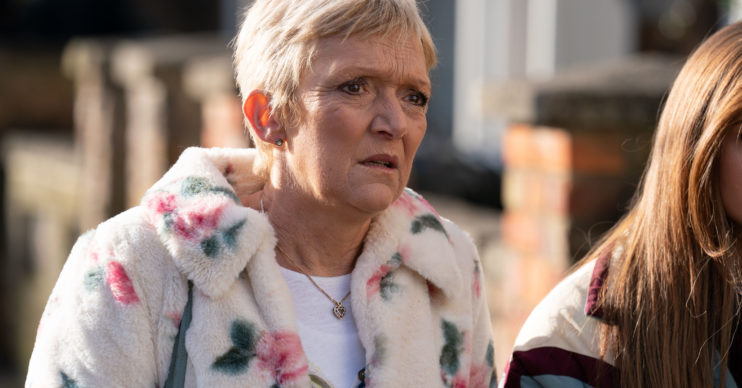 Jean has been battling cancer

Since her run in with Suki in March, who faked having cancer, Jean has stopped taking her bipolar medication.

In last night’s episode (Monday, May 5), Gray managed to find Whitney at Michaela’s flat and bring her home.

When they got back to Albert Square, Tiffany, Kush and Jean were all waiting for Whitney.

As Jean walked up to Whitney and began brushing her hair behind her ears she said: “You have had us worried sick, Stacey.”

She walked away from Whitney and Whitney shot Kush a worried look.

Viewers have now expressed fears that Jean may have dementia.

Is jean in #EastEnders getting dementia ? She called Whitney Stacey

Wait please don’t tell me that jean will get dementia/brain tumour?? Can she have a break please? #eastenders

Mental health storyline for Jean? Has she got dementia? #eastenders

Is it just a side effect of not taking her medication? Or is there more to Jean’s behaviour than meets the eye?

What’s next for Jean?

In tonight’s episode (Tuesday, May 5) Kush learns that Jean hasn’t been taking her medication.

After another run in with Suki, Jean takes her anger out on Phil and explodes at him.

Later a worried Kush tries to talk to Jean but she refuses to listen to him. Concerned and wanting to make sure Jean takes her tablets, Kush goes to desperate lengths.

But what will he do?

Kush continues to worry about Jean’s behaviour and when Shirley tells him the police have arrived, he’s stunned to find Jean called them.

It turns out she rang them multiple times about Whitney’s disappearance, despite Whitney returning home.

When Kush asks her about it, Jean snaps, embarrassed.

Jean goes on the warpath and when she finds Whitney in the restaurant, she explodes at her for lying and making her look stupid.

Shirley witnesses Jean’s outburst and is confused. She later demands Kush tell her what’s going on and he tells her Jean hasn’t been taking her medication.

Worried about her, the pair take matters into their own hands…

Kush and Shirley discuss Jean and put her mood swings down to her medication not working. But they don’t know she isn’t feeling well.

Later, Jean bites Shirley’s head off and storms out. When Tina and Shirley track her down, they’re horrified to find Jean having a seizure. What’s wrong with Jean?