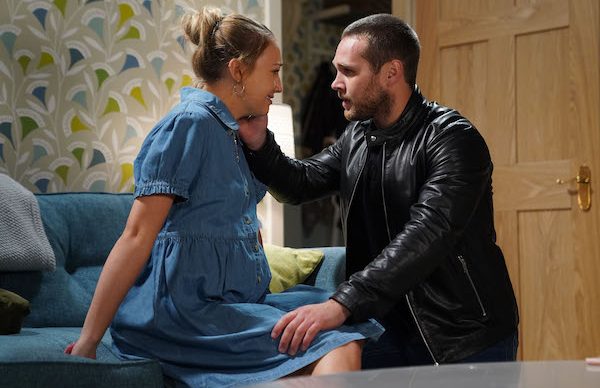 She'll be here any moment now!

Convinced that the secret about Sharon’s baby was finally out, he walked home expecting to face her fury, but was surprised when he heard her groaning in pain.

A worried Keanu found Louise in labour, after her waters had broken.

The pair were then seen waiting for an ambulance to arrive, excited and nervous about what’s to come…

Across the Square, however, Phil was on a mission to discover the truth about Sharon’s baby daddy and, convinced she had an affair with Jack, confronted Sharon once again about Lisa’s accusations.

As Sharon protested her innocence, they learnt that Louise was in labour and Phil raced to the hospital to be with his daughter.

Could some good come from all this bad?

Many fans focused on the happy news, rather than Phil’s mission to blame Jack.

One wrote: “Baby Peggy is coming!”

Another said: “Poor Louise… Of all the people in the Square to have a happy ever after, I hope it’s Louise.”

A third added: “Hope Lou and baby Peggy are going to be okay.”

Spoilers tell us that Louise and Keanu will name their baby daughter Peggy, after iconic landlady Peggy Mitchell.

Not everyone is behind the name choice, however, with some saying it’s old-fashioned and could be a curse for the little one.

In a terrifying twist for the new parents, however, their baby stops breathing and doctors have to fight to save her.

As the families gather to meet the baby, there is panic when she stops breathing and doctors and nurses rush in to save her life.

Are you excited to meet baby Peggy? Leave us a comment on our Facebook page @EntertainmentDailyFix and let us know what you think!