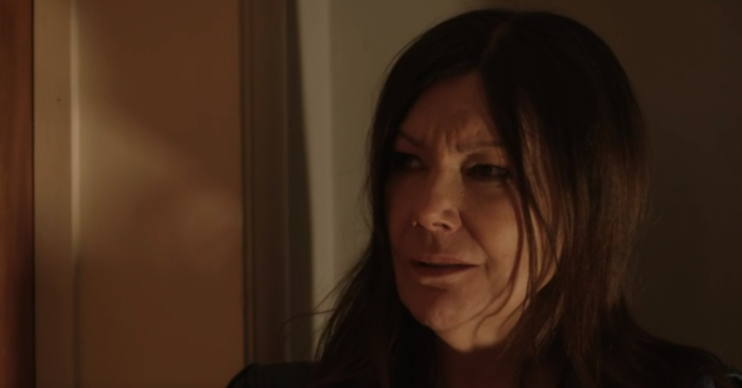 Tony started sleeping with Whitney when she was 12

EastEnders fans were left disgusted as it was revealed Michaela knew her ex-boyfriend Tony was a paedophile.

Before Leo’s death in February, Whitney found herself being stalked by Tony’s son and was forced to stab him in self-defence.

But Leo’s mum Michaela refuses to believe Whitney and is trying to get justice for her son, believing he was brutally murdered.

Currently, Michaela has Whitney held up in her flat, in an attempt to get answers.

In last night’s episode of EastEnders (Tuesday, April 28) Michaela played a voicemail Leo left her before his death, claiming Whitney was going to kill him.

Later, she continued to try and talk to Whitney by sympathising. But she ended up letting slip a big secret.

She said: “I know what Tony was like. How manipulative, how twisted. I was going to come to his trial and then I bottled it. I couldn’t face seeing you.

“When I found out what he did to you, I felt terrible. But at least I thought I protected Leo. I’d done right by him.”

When Whitney asked how she protected her son, Michaela revealed she left Tony and took their son with her.

Michaela explained she threw Tony out, but wouldn’t answer why.

When Michaela said Tony made her sick, Whitney realised Michaela knew Tony was a paedophile and never reported him.

Furious, Whitney said: “You let him rape me!”

Viewers were also disgusted that Michaela knew the truth about Tony, but failed to report it.

Omg! 😮 Michaela is something else! Plus she knew what Tony was like and never said out!! 😤 hoping Whit gets found soon #EastEnders

OMG Michaela knew the truth about Whitney & Tony this while time really? #Eastenders 😨

During the episode, Whitney was able to make contact with her uncle, Max, and told him Michaela was holding her hostage.

Will her family and friends be able to help her?

He came into the show as Bianca’s boyfriend, who had just been released from prison.

But it was quickly revealed Tony had been grooming Whitney from the age of 12. As he returned to the Jackson family, he continued to sleep with Whitney, who was now 15.

On her 16th birthday, Whitney told Bianca what had been happening and she reported Tony to the police.

He eventually went to prison but, some years later, Whitney received a letter from her abuser.

As she went to pay him a visit, it was revealed he had taken his own life in his cell.