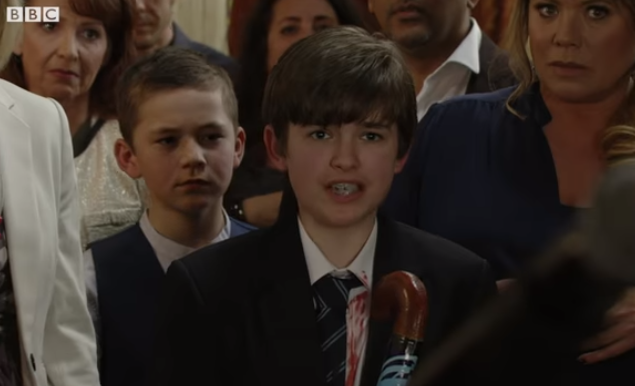 Who is it THIS time?

Fans of EastEnders voiced their frustration last night, as yet another character returned with a different face.

But viewers were fed up, complaining about the fact he’s the FIFTH star to portray Ian’s killer son.

The youngster made a surprise return to screens to meet up with grandma Kathy Beale, after being released from a young offender’s institution.

We last saw the schoolboy in October 2017, when he was sentenced to six years imprisonment for unlawfully killing sister Lucy and for grievous bodily harm with intent on mum Jane.

Luckily, Kathy said “Hello Bobby” to inform confused viewers that this was her grandson.

And fans expressed their disbelief, with one saying: “Another recast? Really?? Eliot Carrington is inextricably linked with the Bobby who killed Lucy.

“As with the recent change to Ben Mitchell, the effect of referring back to previous events is diminished, as it’s difficult to reconcile new faces to the inevitable conversations.”

Another fumed: “Ridiculous. Another new face, just like Ben.”

A third said: “Oh no, not another character swap.”

Dont want fake Bobby. Want the real Bobby who had a real look of evil in his eyes #eastenders

Bobby doesn't even look like the old Bobby Ffs #EastEnders

Another recast? Really??
Elliott Carrington is inextricably linked with the #Bobby who killed #Lucy. As with the recent change to #BenMitchell, the effect of referring back to previous events is diminished, as it's difficult to reconcile new faces to the inevitable conversations.

Some saw the funny side, however, and compared the Beales to Time Lord Doctor Who – able to regenerate whenever they please.

Bobby was originally played by Kevin Curran from 2003, before Alex Curran took over in 2007. He was replaced by Rory Stroud in 2013.

Eliot Carrington took over the role in 2014, and he’s now played by Clay.

Prior to Clay’s appearance on the BBC1 soap, EastEnders’ executive producer Jon Sen said: “Clay’s an exciting new talent with a charisma and an intensity that injects a new energy into the fascinating character of Bobby Beale.

“We can’t wait for audiences to see Bobby return home and the impact his arrival will have on the Square.”

Are you happy with the new Bobby Beale? Leave us a comment on our Facebook page @EntertainmentDailyFix and let us know what you think!