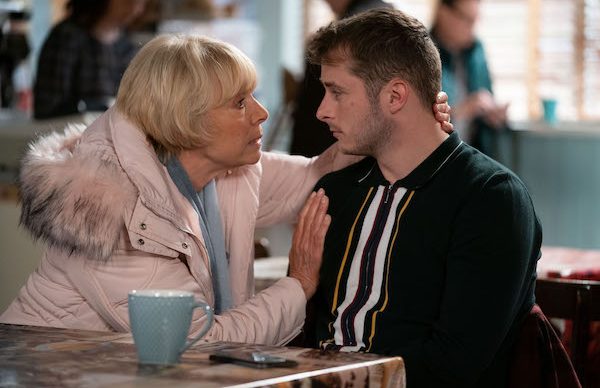 Fans are desperate to see the florist back

EastEnders fans have demanded Pam Coker returns to Walford after he lost his hearing.

Florist Pam was Ben’s boyfriend Paul’s grandmother and turned into one of his biggest champions on the Square when he needed it most.

She helped him through his emotional coming out – and through Paul’s murder.

Pam last appeared in Walford last year when she returned to convince Ben to make things up with Callum and get back together.

And now with Callum finally found but Ben suffering from serious hearing loss, fans are desperate for the kindly matriarch to make her comeback to help him through it.

Writing on Digital Spy forums, one passionate fan wrote: “It seems that Ben is going through a hard time at the moment with him trying to find Callum and also having trouble with his hearing.

“Also the shock of what happened to Dennis must have really affected him. So maybe Jay contacts Pam as Ben always listens to her advice and is like a second mother to him.”

A second eagerly agreed saying: “Pam should just come back for whatever reason they can think of. Permanently IMO.”

Another said: “I hope so. I’d love Pam to return full-time and start working on the flower stall again alongside Jean. I think they’d make a nice friendship.”

In last night’s episode Ben suffered a heartbreaking meltdown as he struggled to hear anything other than muffled noises.

Stood in the kitchen he realised he couldn’t even tell the difference between a running tap and clattering pans and it proved too much for him.

He began sobbing and screaming loudly while trying to desperately hear anything – and it brought his boyfriend Callum running downstairs to help him.

Callum tried to tell him everything would be alright but that doesn’t seem to be something he can promise with the soap already announcing that this storyline would run on for a while.

The soap is introducing its first ever deaf character, Frankie, to help Ben cope with the new challenges of his hearing loss.

Do you want Pam back on the Square? Leave us a comment on our Facebook page @EntertainmentDailyFix and let us know what you think!