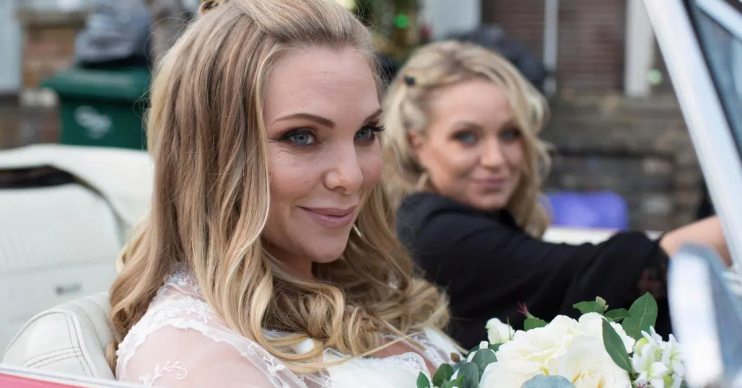 Pair were killed off in a dramatic New Year's Day twist

Fans of EastEnders have been thrilled to see Rita Simons and Samantha Womack reunite with a superb International Women’s Day post.

Viewers were left heartbroken when three years ago, their characters, sisters Ronnie and Roxy Mitchell were killed off on the New Year’s Day episode.

The shock twist left fans gutted when the sisters drowned in a hotel swimming pool – but now the pair are back together in a rare snap.

Shared on Rita’s socials, the snap showed the pair looking stunning, with pal Rebecca McKinnis, with the caption: “These girls,” followed by a love heart emoji.

Rebecca is known for her role as Heidi Hansen in West End show Dear Evan Hansen.

Fans were over the moon to see the actresses back together, filling the comments with well wishes.

One fan wrote: “Love seeing you girls back together, worst thing EastEnders EVER did was kill your characters off.”

Love seeing you girls back together!

A third commented: “How @bbceastenders let go of Ronnie & Roxy I will never know…”

Rita had been out on the town celebrating her birthday with a whole host of popular faces and friends.

The pair’s friendship continued to grow stronger after they left the BBC soap, with the two often popping up on each other’s social media.

Their character’s deaths came as a huge shock to fans, having been a huge part of the show up until being written out.

The producer of the show at the time, Sean O’Connor had given the sisters a huge dramatic ending.

Their heart-wrenching final scenes showed a drunk Roxy get in to trouble when she fell in a closed swimming pool.

The pool was in a hotel where they were celebrating her sister Ronnie’s wedding day. She saw her sibling drowning in the pool and jumped in, in an attempt to save her life.

But the weight of her wedding dress meant that she struggled to stay afloat, with her then drowning too.