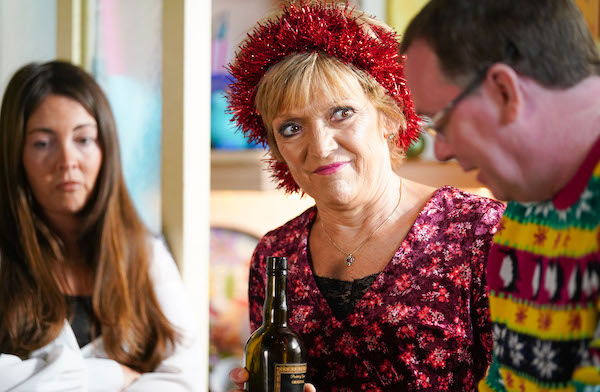 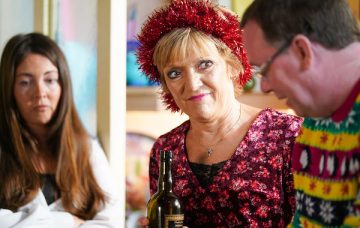 EastEnders fans watched with their hearts in their mouths last night, as scriptwriters delivered the mother of all bombshells.

After 30 minutes of playing dead, Alfie Moon had been resurrected and done a runner with his daughter Cherry.

While many fans blasted the scriptwriters and branded the storyline “ridiculous” and “rubbish”, many even accused the Boxing Day episode of being “the worst ever”.

However, all fans were united in ONE thing – that Jean Slater stole the show.

Firm favourite Jean (played by Gillian Wright) had BBC viewers in hysterics as she attempted to carry on as normal with a smile on her face.

As the rest of the Slater clan panicked, wrung their hands in despair and sobbed over Alfie’s ‘dead’ body, Jean bought some sunshine to the situation by offering everyone tea and crumpets!

In fact, as Alfie’s body lay in the middle of the lounge covered in a Father Christmas outfit, Jean even stepped over his ‘corpse’ to share the refreshments around…

She said: “There’s never not a good time for a cup of tea!”

Well it IS thirsty work pushing someone down the stairs, moving him around and them planning what story to tell the police (although I think the Slaters would have preferred a stiffer drink to go with the stiff body).

Or was Jean, in fact, causing a diversion so that Alfie could make a getaway as some fans believe?

On Christmas Day, EastEnders fans saw Alfie Moon being accidentally pushed down a flight of stairs during a row.

He plummeted to his possible death and bashed his head at the bottom, leaving Hayley and Kat to believe the father of their respective children was a goner.

However, they were thrown a massive curveball last night (Wednesday 26 December), when the police arrived to investigate the death but found the ‘corpse’ had disappeared.

While fans had major problems with the plot and were quick to call out what they believed to be ludicrously unbelievable events, Jean was clearly the heroine of the show.

One laughed: “Love how Jean is just making tea and crumpets and handing it out over Alfie’s corpse #EastEnders.”

Another said: “Jean handing out tea and crumpets over Alfie’s bleeding corpse in the middle of the floor is the definition of ‘keep calm and drink tea’.”

Jean Slater has the best line of 2018 with “there’s never not a good time for a cup of tea” priceless #EastEnders hats off to the writers on that one, nice one ☕️ ☕️

Jean handing out tea and crumpets over Alfie's bleeding corpse in the middle of the floor is the definition of "keep calm and drink tea". #EastEnders
😂😂😂

omg lol Jean is all buttered krumpets, does it get any better. Practically stepping over DeadNotDeadAlfie. it's so Christmasy! 😂 #eastenders

I bloody love Jean!! ‘You girls want anything?’ over Alfie’s corpse 😂 #Eastenders

Oh no, Jean stepping over Alfie’s body with the tray of tea and crumpets…👀😂#EastEnders

Jean is a bloody legend !! #EastEnders

Jean was, once again, a joy to watch.😁
And she's right: there's always time for tea! Even where there's a body in the way and you have to step over him. Twice. 😏#EastEnders

A third added: “Jean Slater has the best line of 2018 with ‘there’s never not a good time for a cup of tea’ priceless #EastEnders hats off to the writers on that one, nice one.”

“Alfie lying lifeless on the living room floor and Jean walks in wth cups of tea and bleedy crumpets… Jean so funny,” said another.

Alfie is currently on the run with his and Hayley’s baby Cherry – but where is he hiding?

And will he abandon his other children to kidnap Cherry?

Did you think Jean Slater saved the episode? Leave us a comment on our Facebook page @EntertainmentDailyFix and let us know what you think!