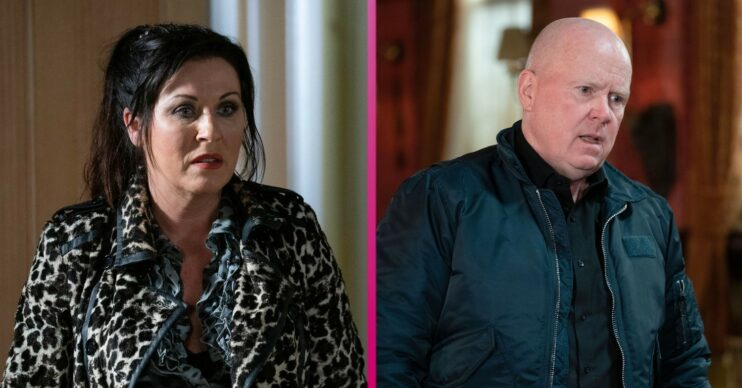 Are there MORE kids on the way for the couple?

EastEnders fans are convinced Kat Slater is going to have Phil Mitchell’s baby.

Viewers have watched over the last six months as Kat and Phil have gone from flirting enemies to lovers.

And now they are set to open their own legitimate business together and make a real go of their relationship, fans think the Walford water will strike again.

Some even think Phil will give Kat her third set of twins.

Kat gave birth to daughter Zoe and her twin when she was a teenager before forgetting about the boy.

She later welcomed son Tommy, and then twins Bert and Ernie.

One said: “I’ve a funny feeling we are getting a Slater/Mitchell child instead with Kat and Phil.”

A second said: “Kat will be the next Walford lady to drop a sprog. Or should I say sprogs – she’ll have twins – can feel it in my waters.”

A fourth said: “The ‘thinking of the show’s future’ part of me wouldn’t hate Phil/Kat twins (or baby) purely for the Mitchell/Slater baby lineage.

“I know it’s not necessary for Phil and Kat, they have enough kids. Especially Kat – and for Phil, especially when they inevitably retcon Albie to being his.

“But part of me is thinking that in 16 years time, they’d be a hell of a legacy character.”

A fifth tweeted: “I think Phil’s going to end up getting Kat pregnant. #Eastenders @bbceastenders”

Fans are also convinced that Sharon Watts’ son Albie will be revealed as Phil’s child.

However, she had a pre-birth DNA test done to see if Phil or her lover Keanu was the father with Keanu being shown.

But fans are convinced it will turn out to be a mistake and will reunite the former couple one day.