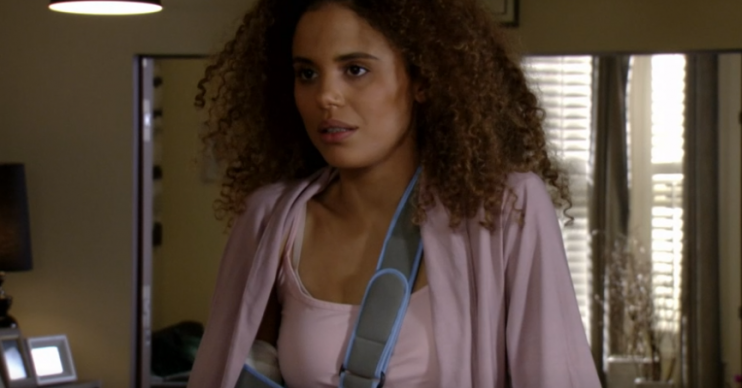 Fans of EastEnders have been left confused as Chantelle Atkins is still wearing her cast and sling months after her husband Gray broke her arm.

On January 7 of this year, abusive Gray lashed out at his wife after she didn’t appear upset at her negative pregnancy test.

In a fit of rage, he grabbed her arm and twisted it, and it was only after she pleaded with him, that guilty Gray took his wife to the hospital.

Over the last two months the hairdresser has had her arm in a cast and a sling in order to help it heal.

But some fans were left confused as to why Chantelle still her had arm in a cast as it has now been more than two months since the incident happened.

About time Chantelle got her sling off, it’s felt like years since she actually broke her arm #EastEnders

Chantelle been in that sling since crimbo??

How long has poor Chantelle had that sling on her arm? Feels like forever #EastEnders

However according to the NHS website, a cast will need to stay on the patient until the broken bone has healed.

Although it usually takes one to two months, it can take longer if the break was severe.

Chantelle also mentioned in last night’s episode (Tuesday, March 10) that her cast would soon be coming off.

Sadly this wasn’t the first time Gray has laid his hands on his wife and it certainly wasn’t the last.

Earlier this week he ended up attacking Chantelle once again after he had been suspended from work and learning that his firm had dropped Whitney’s case.

How long has poor Chantelle had that sling on her arm?

After Whitney found out Gray was no longer representing her, she decided to go on hunger strike until someone listens to her about what really happened with Leo.

However, Gray decided he was going to take on Whitney’s case alone, in the hopes that if he wins he would get reinstated at work.

In last night’s episode he paid Whitney a visit telling her to stop her hunger strike, but she was adamant she wanted to do things her way.

Is she going to put her health in danger?