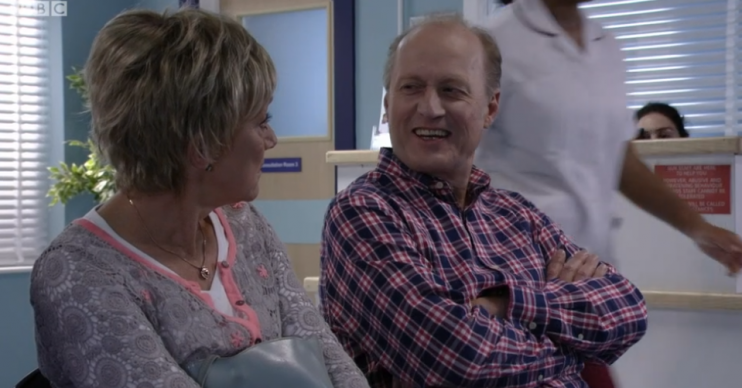 They love the chemistry!

EastEnders fans have fallen for the charms of Daniel Cook – much like his friend Jean Slater seems to have!

Adrian Edmondson joined the BBC soap as Daniel earlier this year and, despite his sharp tongue and annoying personality traits, has won over notoriously fussy soap fans.

This is partly thanks to his touching friendship with fellow cancer sufferer Jean.

Jean didn’t exactly warm to Daniel at first, who she met while undergoing chemotherapy for ovarian cancer.

But the pair have developed an unbreakable bond which viewers have totally got behind.

Sadly, the BBC soap has confirmed that Daniel is dying – and his inevitable death will leave Jean and viewers devastated.

Writing on a Digital Spy Forum, one fan wrote: “Anyone else really liking Ade Edmondson in EastEnders? I wasn’t sure at first – during the initial hospital scenes – but I’m really warming to him now and I love his chemistry with Jean.

“He seems like such a plausible character and seems to play it effortlessly.”

A second agreed, writing: “I absolutely adore him. So funny but also really moving. And hot, on that motorbike, quite frankly. Take me to Southend, Ade! Lucky, lucky Jean.”

Others called him “great” and “so so funny”, with one adding: “Yeah I love his and Jean’s friendship. I didn’t expect Ade to stick around long-term so it’s not a surprise he’ll be killed off at the end of it.”

One more said: “He has done more with his role in a few episodes than Dean Gaffney and Laila Morse have done in years,” and another agreed, saying: “Some actors do a lot with a little.”

Can't get enough of Adrian Edmondson as Daniel Cook in #EastEnders pic.twitter.com/R06ZatdRwp

Twitter users also enthused about the relationship between Daniel and Jean, with one calling them “cute” and “awesome”.

Another declared that they “can’t get enough of Adrian Edmondson as Daniel Cook in EastEnders”.

Even wasp-chewing Big Mo has taken a shine to the character, flirting with him outrageously in scenes that aired this week.

Of course it’s no surprise Adrian is playing a comedic character, having become famous in The Young Ones and Bottom opposite the late Rik Mayall.

Adrian, who is married to fellow comic Jennifer Saunders, has taken on ‘serious’ acting roles in numerous dramas including Holby City, Bancroft, and War and Peace.

He has also appeared in Disney’s Star Wars: The Last Jedi, which was released in 2017.

Have you warmed to Daniel Cook? Leave us a comment on our Facebook page @EntertainmentDailyFix and let us know what you think!