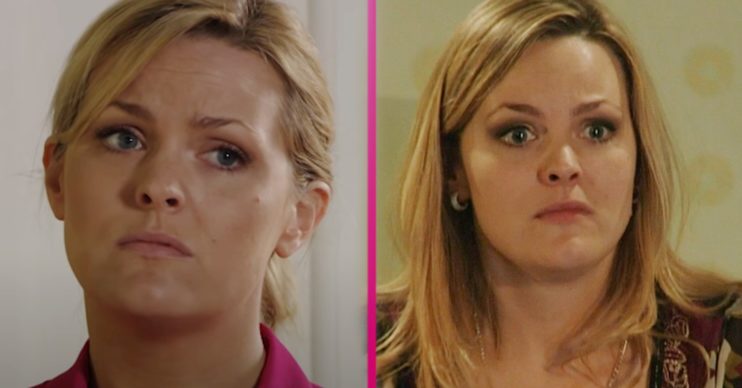 EastEnders fans have called for Tanya Branning to return to the soap after the BBC re-aired the iconic 2007 Christmas episode which revealed Max and Stacey’s affair.

Back in 2007, Max famously had an affair with his son Bradley’s wife, Stacey. Just before Stacey and Bradley got married, Max tried to talk Stacey out of going through with it by confessing his love for her.

But as the pair shared a kiss, they had no idea they were being recorded by Lauren’s video camera.

Lauren burned the recording onto a disc and put it under the tree for Bradley. But when the video was played in front of the entire Branning and Slater family, the drama really kicked off.

In the episode which re-aired last night (Tuesday, August 4), Max tried to tell Tanya that the video was a joke. However Stacey was unable to hide her guilt and confessed it was true.

Poor Tanya was heartbroken to discover her husband had been unfaithful and, throughout the episode, she struggled to process the revelation.

She famously slapped Stacey before kissing Stacey’s brother Sean in an upset state. The episode ended with Tanya falling down the stairs as she tried to leave with Lauren, Abi and Oscar.

However fans thought the episode was some of Tanya’s best moments and want her to return to the soap.

I just adore @dollyjoyner and always want her back in Albert Square!! #Tanya #love #EastEnders

I wish Tanya would come back! #EastEnders 😔

So can EE please bring back Tanya and Janine and in 5years time when it’s the 40th Anniversary kill of Max and have the these 3 iconic Eastenders women be responsible! Would pay great homage for the 20th anniversary! #EastEnders pic.twitter.com/bWUVPXVqRo

Wish Tanya would come back even for just a visit #EastEnders

EastEnders: What happened to Tanya Branning?

In 2018, Tanya and Max’s daughters Lauren and Abi both fell off the roof of The Vic while trying to get Max down.

Lauren survived the fall but a pregnant Abi was declared brain stem dead. After Abi’s daughter was delivered, her life support machine was turned off.

Tanya struggled terribly with the grief of losing her youngest daughter and couldn’t attend the funeral. She had a nervous breakdown and it was revealed she had been committed to a psychiatric hospital.

Will Tanya ever return to EastEnders?

In 2018, Jo appeared on Lorraine to talk about returning to EastEnders saying: “Never say never.”

In 2017, Jo joined the cast of Channel 4’s Ackley Bridge and she is still a member of the main cast.

Would you like to see Tanya return to the soap? Leave us a comment on our Facebook page @EntertainmentDailyFix and let us know what you think!