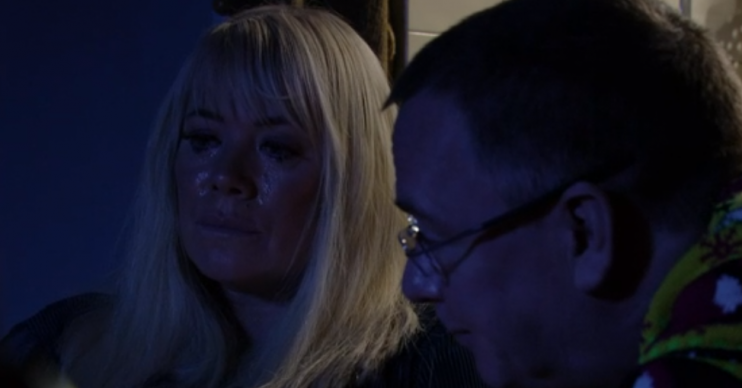 Sharon and Ian have known each other for years

Fans of EastEnders have begged the soap not to put Ian Beale and Sharon Mitchell together after her relationship with Phil imploded.

Recently Sharon and Phil split after he discovered he wasn’t the father of her baby – Keanu Taylor is.

In last night’s episode of the soap (January 1 2020), viewers saw a flashback to the events of Christmas Day.

After seeing Phil throw Sharon out, Ian made it clear to his mum Kathy, who was also once married to Phil, that he was concerned about Sharon.

Later Ian went to see Sharon, who was sitting in Albert Square, and took her to the cafe to talk about the situation.

Ian tried his best the help Sharon and comforted her when she broke down in tears.

The pair soon began reminiscing about when they were young and had a crush on each other.

Ian tried to set Sharon up at a hotel, but she wanted to speak to Linda about staying with her so she could be around for her son Denny.

But viewers have picked up that Ian was trying to flirt with Sharon and have begged the soap not to put them together.

Ian's in love with Sharon, and I really hope they don't go down that road #EastEnders

Dear @bbceastenders, please don't put Sharon and Ian together. It would be sacrilegious, I tell you.

Fans know Sharon had an affair with Keanu in 2018, but after they ended their affair he began dating her stepdaughter Louise Mitchell.

Please don’t tell me Ian and Sharon get together, don’t do that!

Louise got pregnant but she ended things with Keanu when she learnt her dad Phil had paid him to keep an eye on her.

She also told Keanu she had aborted their baby, leaving him heartbroken and he ended up sleeping with Sharon once again.

Louise and Keanu soon made up and she revealed that she didn’t abort their child, but Sharon also discovered she was pregnant.

Phil found out the truth and his son Ben hired Martin Fowler to kill Keanu.

But in last night’s episode it was revealed Martin and Linda Carter helped Keanu run away.