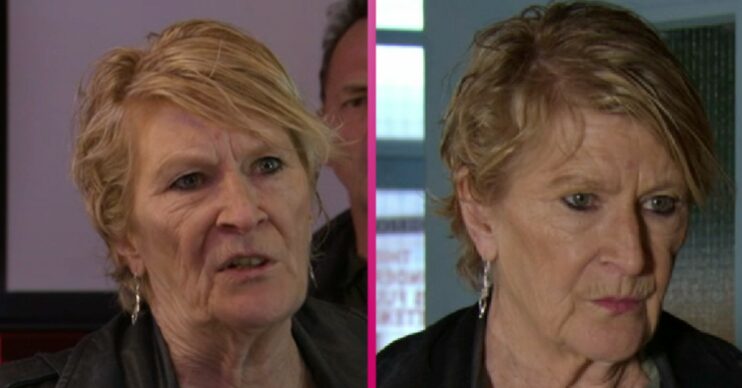 In the episode, Shirley punched Zack in the face after finding out he cheated on Nancy.

EastEnders: Shirley found out about Zack cheating on Nancy with Sam

Last week, Zack ended up sleeping with Sam Mitchell after an argument with Nancy.

The next morning he managed to get Sam out of the house seemingly unnoticed.

Although he planned to tell Nancy what he did, she apologised to him and didn’t tell her what really happened.

However when Nancy, Zack and the Carter family went to the Prince Albert to celebrate Tina’s plaque being put on the wall, a photo came through on the projector showing Zack topless with Sam in a dressing gown outside Sharon’s house.

Last night’s episode of the BBC soap picked up where Monday’s episode (June 20) left off.

It was revealed to everyone in The Albert that Zack had cheated on girlfriend Nancy with Sam Mitchell.

Nancy’s dad Mick, half-sister Frankie and grandmother Shirley were in the bar at the time and were furious to realise what Zack had done.

Mick got up to confront Zack, however Shirley beat him to it and ended up punching Zack across the face.

As Shirley walked out she said: “I hope she was worth it. Mick you were far too slow.”

Shirley walked into the office saying: “I’m here to see the slapper.”

As the three women looked at her, Shirley pointed to Sam and went “that one.”

She confronted her over her night with Zack and told Sharon that her brother cheated on Nancy.

Fans were in stitches at Shirley’s scenes and called her the ‘star of the show.’

"I'm here to see the slapper."
Confused glances between Sharon, Kat & Sam.
Shirley points to help them out.
"That one!"
Brilliant.

Shirley saying she wants to speak to the slapper 😂 #EastEnders

Did you watch last night’s episode of EastEnders? Leave us a comment on our Facebook page @EntertainmentDailyFix and let us know what you think.