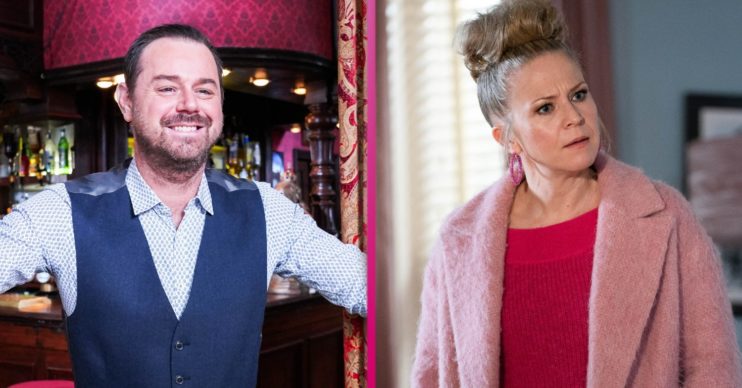 Is all as it seems?

EastEnders has announced they’re changing the name of The Queen Vic to The Lady Di. But fans weren’t easily fooled.

On Twitter, EastEnders shared a clip from tonight’s episode of the soap (Thursday, April 1).

In the clip, Linda shows Frankie the new sign for the pub, revealing it’s a surprise.

The end of an era for Albert Square. A new beginning for the Carters. Welcome to Walford, The Lady Di! 🐶 #EastEnders. Tonight. 7:35pm pic.twitter.com/SPeap9D2zj

She soon reveals it’s a sign for the pub which includes a painting of their dog Lady Di.

As Linda and Frankie toast to new beginnings, a shot of the outside of the pub can be seen with the name changed to The Lady Di.

However fans were quick to point out today is April 1st, meaning it’s most likely an April fools day joke.

One fan wrote: “Is this an April  fools?”

A second tweeted: “Had me for a minute.”

Read more: Does Lily die in EastEnders after falling down the stairs?

A third commented: “April fools to you to EastEnders.”

The Queen Victoria has always been known as The Queen Vic, despite the change in owners over the years.

However recently, the Carters got the pub back and have started to move their belongings back in.

As well as Mick, Linda and Ollie moving back in, Mick’s daughter Frankie also recently decided to move in with them.

But it looks like The Queen Vic could potentially have more people living there as Mick and Linda’s daughter Nancy is due to return to Albert Square.

In February it was announced actress Maddy Hill would be returning to EastEnders to reprise her role as Nancy.

Read more: EastEnders actor Danny Dyer to have surgery on testicle after it swells to size of ‘jacket potato’

Speaking about returning to the BBC soap, Maddy said: “I’m so excited to be coming back and reconnecting with all the hilarious, warm, talented cast and crew and meeting some lovely new faces.

“I absolutely loved playing Nancy and have often wondered what she’s up to, so feel very grateful to rediscover her 5 years on.”