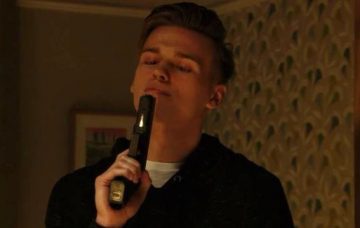 EastEnders: Did Hunter turn the gun on himself after killing Ray?

What WAS that gunshot?

EastEnders has ended with a shocking suggestion of yet more bloodshed after a festive period packed with violence.

The soap has seen Stuart Highway savagely beaten, Alfie Moon pushed down the stairs, Mel Owen left for dead, and Ray Kelly run over then shot in recent episodes.

In another violent twist, the latest episode hinted that Hunter Owen turned the gun he used as a murder weapon on himself.

The shocking suicide would leave a grisly body count after a Christmas and New Year marked by brutal storylines.

Some viewers were stunned by what they heard…

Did Hunter shoot himself??! #EastEnders

so are we not gonna talk about how Hunter shot himself? #Eastenders

Naaaaaaaaaaaahhhh #EastEnders did Hunter seriously just do that. Was I hearing things?! We had to replay that back. Pissed we haven’t got next Monday’s episode

I don’t think Hunter shot himself, when the glass fell and smashed with the sound of the gunshot too, maybe that was Mel having a flashback to the shots in the woods. #EastEnders

Classic EastEnders, guarantee Hunter hasn’t shot himself in the head. The glass smashing was real, gunshot sound was inside Mel’s head because she’s having a flashback from PTSD… Soon be talking to Lisa again about dealing with mental health & their past friendship #EastEnders

Another fan had a further theory: Hunter fantasising about his next ‘kill’…

#Eastenders no hunter didn’t kill himself, he has just thinking of the power he has with the gun and the revenge he can get. I think he’ll become a serial killer.

What do you think happened?