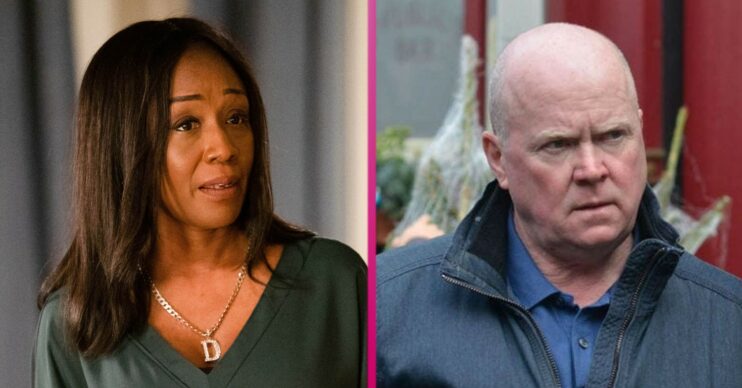 Fans have turned on Denise

EastEnders fans have slammed Denise Fox after she threatened Phil Mitchell over their son Raymond.

The one-time lovers have been at war over their shared son Raymond for months.

Raymond was adopted after Denise decided she couldn’t raise another child after 50.

However when his adoptive family were murdered by enemies of his grandmother Ellie – Denise turned to Phil for help to get their son back.

Originally Phil agreed to just be a silent partner after he outwitted Ellie and forced her to hand Raymond over.

But as he’s gotten to know the boy, he’s become determined to be a father again – and this time get it right.

Earlier this week Phil warned Denise that he wanted joint custody of Raymond.

Denise didn’t take him seriously at first – and instead banned him from any contact with Raymond at all.

However last night that all changed when she received a letter from Phil’s lawyers.

Taking policeman boyfriend Jack Branning with her, she confronted Phil about going to court.

Denise pointed out that they only had Raymond because of Phil’s dodgy dealings – and they could lose him for good.

“You take this to the courts, and this could all come crashing down around us,” Denise warned.

However Phil refused to back down. Instead he told her that Ritchie would find a way to make sure he got Raymond – and Ellie was kept out of it.

“I ain’t gonna let you put me off fighting for my son,” Phil said.

With no other option, Denise came out fighting.

“If you take this to court, we could both lose him,” she told him.

“Well, I ain’t gonna let that happen,” Denise vowed. “You can forget about seeing Raymond again.”

However fans have pointed out that Denise is a hypocrite for using Phil’s criminal connections to get Raymond in the first place – only to ban him from seeing him.

One said: “Denise is a hypocrite #EastEnders.”

A second said: “Denise needs to let Phil see Raymond or has she forgotten who her ex is?”

A third said: “Denise is really [expletive] me off in #eastenders. Her character is just a complete contradiction and hypocrite.”