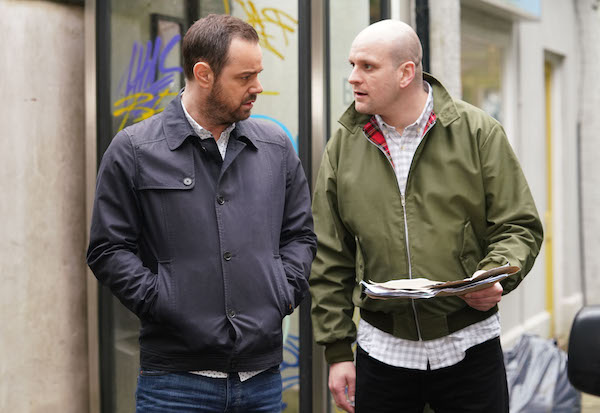 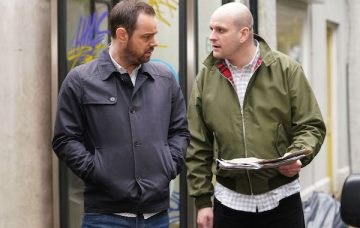 The pair are arch enemies on screen...

With it looking increasingly likely that Mick Carter is about to start a long and lengthy stretch in jail, it goes without saying that his ‘frenemy’ Stuart Highway has royally ruined his life.

But while Stuart and Mick are Walford’s biggest enemies, things couldnt be more different for the actors behind the warring former friends.

Danny Dyer has opened up about his alter ego’s impending time at Her Majesty’s pleasure, but has admitted that the highlight of this whole storyline has been working with co-star Ricky Champ, who plays evil Stu.

“I think Ricky is a wonderful actor – he’s very underrated. He’s been under the radar for long enough and it’s been a real pleasure to work with him.

“I liked our early stuff when he first came in and it was all joking around. Them scenes are long gone now though!”

But just because Ricky and Danny are friends when the camera stops rolling, that doesn’t mean Danny doesn’t want to see his character get justice.

Talking about Mick’s future after a stretch inside, Danny has hinted that Mick could come back to the Square a changed man…

“I don’t know what happens, but I would have thought that Mick is going to be slightly adjusted as a human being.

“Ultimately, he’s going to want revenge for everything. All you have in prison is your own thoughts and Mick’s been thinking a lot about Stuart.”

“We built a set within the studio and I was interacting with different characters, so it didn’t feel like EastEnders for a bit. The job changes when you go off the Square.

“I really think we have nailed it. It was very well cast and was nice to get a bit of a fresh intake on how Mick would survive away from his family.”

Are you looking forward to seeing how Mick gets on in jail? Leave us a comment on our Facebook page @EntertainmentDailyFix and let us know what you think!