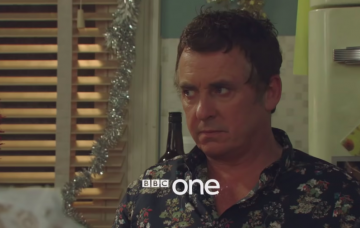 Alfie Moon has a secret. A secret so toxic that, when it spills out, it will tear apart his family and break it to its core.

This Christmas Day, Alfie’s little mistake will catch up with him when the identity of Hayley Slater’s baby daddy is finally revealed – and Kat Slater goes nuclear.

The scenes are expected to became as renowned as Kat and Zoe Slater’s infamous “You’re not my muvva” showdown – only this one is tipped to end in blood shed.

While fans have predicted that Alfie dies this Christmas after his plans to convert a loft, a spokesperson for the soap previously teased the dramatic events of Christmas in Walford.

They said: “Christmas is rarely a quiet time in Albert Square and this year is no exception when at least one person is left with blood on their hands.

“Alfie is determined to give Kat the perfect Christmas, but his dreams come to a sudden halt when the truth about him and Hayley unravels in catastrophic style.

It wouldn’t be Christmas without a bit of drama in Walford. #EastEnders pic.twitter.com/8H94t8wKSN

Meanwhile the Christmas trailer shows Kat screaming at Alfie, who is dressed as Father Christmas.

“Don’t you touch me,” she screams at Alfie as she smashes up the Slater’s overcrowded living room.

Later, Kat grabs a huge metal pole and begins smashing up the cars in front of the house, before snarling: “I will do time for you.”

We have to admit, the chances of Alfie seeing in 2019 seem slim…

Speaking at an EastEnders press event, he teased: “Kat is finally learning to trust Alfie, arguably foolishly, and she’s not aware that Alfie carries a huge secret.

“Alfie is doing everything he can to keep that secret, but he’s growing increasingly fixated with Cherry, so it’s only going to take one slip-up before something sinister and dark occurs.”

Other storylines that will be airing over the festive period include Mick Carter’s sweet – and probably violent – revenge on Stuart Highway… Which can’t come soon enough for fans.

John said: “Mick is free, but it doesn’t take too long for him to work out how Linda got him out of prison. Disturbed by what he’s already been through, it only takes one word from Stuart to lead Mick to take the ultimate revenge.”

John explained: “Mel has found herself scorned by Ray and she is determined to take revenge like no other we’ve ever seen before.

“Pull all those things together, it’s clear that someone at the end of our Christmas period is going to have a lot of blood on their hands.”

There will be some happy scenes during the festive period, with Kim giving birth (albeit with Phil Mitchell as midwife and the father of the baby AWOL), while Bernadette Taylor and Karen Taylor have “optimistic, happy and life-changing experiences coming up”.

Do you think Kat will kill Alfie? Leave us a comment on our Facebook page @EntertainmentDailyFix and let us know what you think!