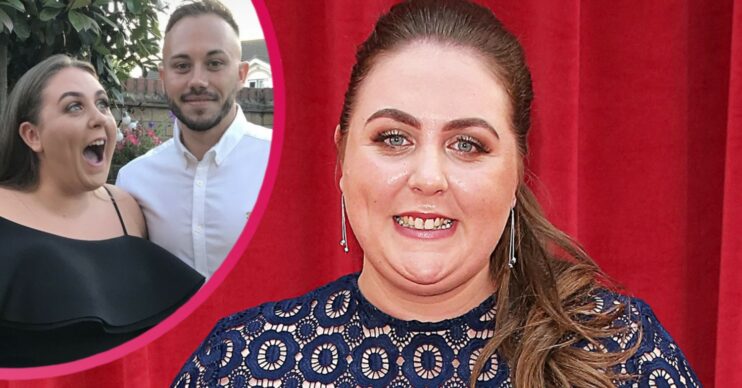 The loved up couple started dating in 2018

EastEnders star Clair Norris has shared a sweet tribute to her boyfriend, as they mark their third anniversary together.

The actress – who plays Bernie in the BBC One soap – spent the weekend in Cornwall with partner Lewis Wood.

During the romantic getaway, the couple made the most of the coastal town as they celebrated the occasion.

Clair, 23, documented the couple’s weekend in a series of Twitter posts.

The soap star visited the beach before enjoying cocktails and dinner with Lewis.

Sharing a snap of herself at a beach-front restaurant in St Ives, Clair penned: “Travels over 300 miles to Cornwall to have a Mexican.”

Three years of memories and a lifetime to come

Meanwhile, in a second selection of photos, Clair and Lewis were spotted on the beach.

The actress later shared a touching tribute to her boyfriend.

She wrote: “Happy anniversary ‘darling’. Three years of memories & a lifetime to come.

“Thank you for being my partner in crime. I love you endlessly…”

Following the post, EastEnders fans rushed to show their support.

One wrote: “You look stunning.”

Read more: Who is Bernadette Taylor in EastEnders and why is she so desperate to be a surrogate mother?

A second told the couple: “Welcome to Cornwall.”

Another shared: “You look absolutely beautiful as always.”

Who is Clair’s boyfriend Lewis?

Meanwhile, Clair and Lewis tend to keep their relationship private.

The pair first met back in April 2018, before going public with their romance three months later.

Since then, they’ve moved into their first home together.

However, the actress admitted to feeling “useless” whilst on a break from EastEnders.

She previously explained: “So I feel like a lot of people probably would answer this by saying that they’re learning a new language or you know, currently writing a book or something.