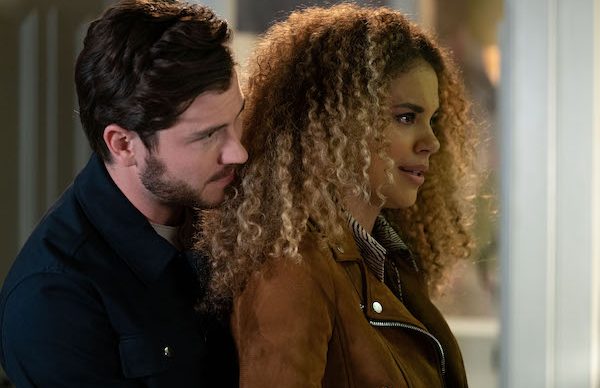 EastEnders SPOILERS: Chantelle fears for her life when Gray discovers she lied about returning to work

Will she live to regret it?

Chantelle Atkins has every reason to be terrified when her abusive husband discovers she has lied to him in upcoming EastEnders scenes.

Viewers know that Gray Atkins is a vile bully, who beats up his wife whenever he loses his temper.

Next week, Gray throws a party for Chantelle to tell everyone the fabulous news that they are expecting a baby.

And while her family is thrilled to hear that there’ll be a new baby in Walford soon, nobody knows the dangers that Chantelle and the unborn tot face every time they are alone with Gray.

Viewers know that Gray once locked his wife inside the house for a week to use her as a punch bag because he felt humiliated by her being close with her family.

However, after discovering Chantelle is pregnant with their third child, Gray has tried to stop his violent outbursts towards his wife and started to destroy household objects instead.

In scenes to air later this month, Chantelle is left terrified when Gray discovers she’s lied about returning to work.

Chantelle, played by Jessica Plummer in the BBC soap, is secretly thrilled when Denise Fox calls her and asks if she can possibly cover at the salon.

She leaps at the chance and enjoys being back at work, but her happiness is short-lived as Gray spots her working in the hairdressers.

When she arrives at the pub to discover Gray has thrown a surprise party for her, it’s clear he is seething.

What will he do when they’re alone behind closed doors?

Distressed soap fans believe that Gray is capable of murdering his wife during one of his savage attacks, but boss Kate Oates has suggested that the character is redeemable.

She recently told The Sun Online: “I know there’s been a little bit of conversation about the fact that EastEnders always make their be-suited educated characters villains and it’s so crucial to his character because he works in the law fighting for the little guy.

“That confuses Chantelle because he’s got a social conscience so he’s the opposite of her father who was completely flaky and couldn’t hold down a job as a guy who really does hold down a job.

“Plus the fact that he’s part of this aspirational lifestyle. Gray has got a lot of redeeming qualities.”

She continued: “And characters can change and they can be redeemed, but I believe in those kind of dynamics that ultimately the victim, in this case, Chantelle, their first job is to look after themselves and if Gray could be redeemed later than that’s up to him.

Do you believe Gray Atkins can be redeemed? Leave us a comment on our Facebook page @EntertainmentDailyFix and let us know what you think!